From the RuneScape Wiki, the wiki for all things RuneScape
Jump to navigation Jump to search
The Old School RuneScape Wiki also has an article on: osrsw:Ice Troll King

The Ice Troll King is the boss monster for The Fremennik Isles quest, and is the leader of the ice trolls. He is located on the northern part of the isles. He uses all 3 combat styles, which includes a Melee attack, a Magic attack that freezes players, and a Ranged in which he will throw rocks at players and a special move which will send players flying across the battleground.

The main thing to be careful about is that he attacks using his special attack that knocks players backwards. Players should use the Protect from Magic or Protect from Missiles Prayer. Protect from Melee will result in the troll king knocking the player into the cave wall for very high damage which will repeat mutiple times, leaving them almost helpless; when players use either of the other prayers, it negates his attack which knocks you back. Wear the Yak hide armour and Fremennik round shield (created during the quest). This, combined with the Protect from Magic Prayer, should keep damage taken to a minimum as the yak armour will greatly reduce his melee accuracy and the shield will lower his ranged strength. A one handed dragon weapon or better is advised to defeat the King as he has high defensive stats.

One of the most widely-used ways to kill the King is to use the Protect from Magic prayer, along with the Fremennik round shield and the Yak hide armour, because the prayer will protect you from the troll's mage attack, and your Fremennik round shield and yak-hide armour will greatly reduce the damage (and not just the accuracy) of the troll's melee and ranged attacks, and he will not hit you for more than 10 or 20 life points with each hit. 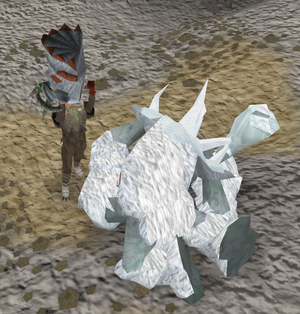 The Ice Troll King after being killed.

Another way of defeating him is to simply use a ring of recoil and to stand well away from him. This will cause him to use ranged attacks dealing small amounts of damage to you and him. This method uses a lot of food and may still result in death if you are unlucky.

Also usable is the Protect from Missiles prayer. If this prayer is used, the Troll King can only use magic and close-range (melee) attacks, and players can negate his attack which knocks them backwards. However, he can still freeze players with his magic attack which can be highly annoying and a waste of prayer, and Protect from Missiles has a higher prayer requirement. Bear in mind also that the damage taken from the Magic attack is not reduced nearly as much by equipment, if at all. For these reasons, Protect from Magic is generally recommended.

After the Ice Troll King is dead, decapitate him and take the head to the Burgher to show you have defeated him.

For further detail on this and other parts of the quest, see The Fremennik Isles quest guide. Note: the King has a magic attack similar to ice barrage however players can use prayer to protect themselves.

This information has been compiled as part of the update history project. Some updates may not be included - see here for how to help out!
Retrieved from ‘https://runescape.wiki/w/Ice_Troll_King?oldid=35630234’
Categories:
Hidden categories: