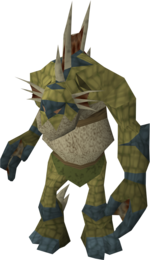 Troll fathers are one of the monsters fought during the combat portion of Troll Invasion. They look exactly like the updated river troll seen in the Court Cases, but much larger. It uses only ranged attacks, and can summon three troll runts to help assist it in combat. The runts use only melee attacks. If the father is still alive when his runts are below half health, he will heal all three of them rapidly and simultaneously for around 150 life points each time, the exact amount vary according to the runts' combat levels. As a result, it is important to kill the father before engaging the runts. Some people like to pray Deflect Missiles/Protect from Missiles when attacking this NPC as it sometimes can hit more than you expect.

It is possible to kill the father before he summons his runts, and they will not appear if done so.