From the RuneScape Wiki, the wiki for all things RuneScape
Jump to navigation Jump to search
The Old School RuneScape Wiki also has an article on: osrsw:Guard (Goutweed)

Troll guards patrol the Troll Stronghold storeroom. The player must avoid being seen in order to reach the goutweed. If a guard sees the player, it will throw its club at the intruder with surprising accuracy, knock him unconscious, and cause 0-60 points of damage. The player will be thrown out of the storeroom, where they can try again. The Protect from Missiles prayer will save prevent damage from the club, but will not prevent the player from being thrown out.

A guard only sees the player if it is directly facing the player and within (approximately) five squares of the player. Sometimes if the player runs through a guard, it may not see the player even if he is one square away; this happens especially near the door to the room. 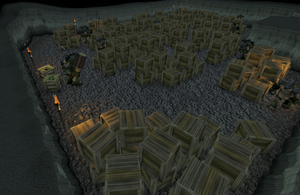 This information has been compiled as part of the update history project. Some updates may not be included - see here for how to help out!
Retrieved from ‘https://runescape.wiki/w/Guard_(Goutweed)?oldid=35890040’
Categories:
Hidden categories: