From the RuneScape Wiki, the wiki for all things RuneScape
Jump to navigation Jump to search
The Old School RuneScape Wiki also has an article on: osrsw:Sea Troll General

The Sea Troll General is the Second-in-command of the Sea Trolls that are terrorizing the small settlement north of Eagles' Peak, the Piscatoris Fishing Colony. It is a quest monster; involved with the Swan Song quest. The Wise Old Man fights the General, easily avoiding its lumbering attacks and not even being hit by its swinging club. He destroys the troll as it attempts to flee, and is nearly victorious, thinking that he beat the trolls. As he is celebrating through a victory dance, the Sea Troll Queen appears, and deals 2,345 life points to the Wise Old Man. His health seems unaffected, but he is incapacitated and the player must take on the Queen alone.

Though the General is a strong foe, with many life points, it is never fought by the player and never gets the chance to hit the Wise Old Man. Therefore, no information about its combat level or maximum hit are known. It is a Quest Monster, but it is only fought in cutscene, not in an actual battle. 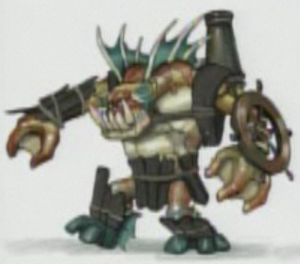 This information has been compiled as part of the update history project. Some updates may not be included - see here for how to help out!
Retrieved from ‘https://runescape.wiki/w/Sea_Troll_General?oldid=35640718’
Categories:
Hidden categories: