From the RuneScape Wiki, the wiki for all things RuneScape
Jump to: navigation, search
The Old School RuneScape Wiki also has an article on: osrsw:Thrower Troll
For the variant encountered in Daemonheim, see Thrower troll (Dungeoneering).
Not to be confused with troll ranger. 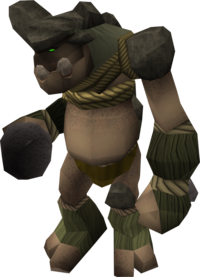 Thrower trolls are trolls that attack with ranged. They are relatively annoying monsters that throw rocks at passing adventurers, regardless of being engaged in combat or not. They are rarely ever on their own, preferring to be together in groups, often attacking from the top of a cliff shouting "Urg!". They can hit very accurately, even against higher-level armour. Although each troll's attacks are slow, players usually come under fire from several of them at once. A Fremennik round shield can reduce their max hit (below about 160), but this method is seldom used because people prefer using other shields or activating Protect from Missiles.