From the RuneScape Wiki, the wiki for all things RuneScape
Jump to navigation Jump to search
HarpoonHarpoon (hard farm requester)? (edit) 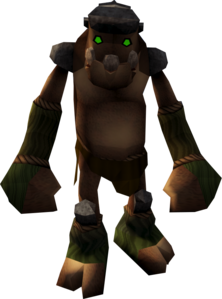 Harpoon is a young troll found on the south part of the Deep Sea Fishing hub. He is there with his younger brother Bubbles to catch rocktails as they are a delicacy for trolls, but they are unwilling to go to the living rock caverns. He used to love Fishing and was named after eating a Harpoon but likes it less after his brother ate his Bubbles skill pet.

Harpoon may occasionally appear at Manor Farm, asking for help with a hard Farming Guild request.

This information has been compiled as part of the update history project. Some updates may not be included - see here for how to help out!
Retrieved from ‘https://runescape.wiki/w/Harpoon_(Deep_Sea_Fishing)?oldid=35698395’
Categories:
Hidden categories: