Not to be confused with Magic incense sticks.

Magic Stick is a troll shaman encountered in the Burthorpe Slayer Cave during the Burthorpe Achievement Path tutorial. He is responsible for creating the gelatinous abominations in the cave, and is defeated by the player and Ariane. He starts the fight immune to damage due to having a green shield up, but it can be dispelled by using the confuse spell. He will create another shield eventually and start gradually healing in 10 lifepoint increments, but he remains vulnerable to damage during this time. 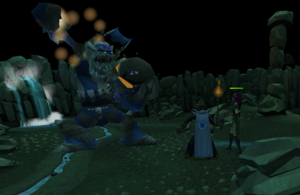