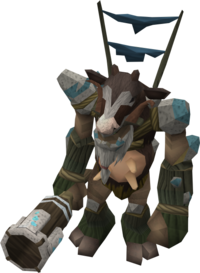 Troll mage commandos were a type of small troll that appeared to be disguised as a cow. They were found wandering around Burthorpe and Taverley, with Troll commandos and Troll ranger commandos. They dropped the Spellstorm drape. Killing them could be a good way to make money for new players, because the trolls were quite weak and rarely hit.

They were replaced with White wolves, which have the same stats and drops.