From the RuneScape Wiki, the wiki for all things RuneScape
Jump to: navigation, search
This article is about the NPC in an Enchanted Valley. For the NPC in the Court Cases Distraction and Diversion, see River troll (Court Cases).
The Old School RuneScape Wiki also has an article on: osrsw:River troll 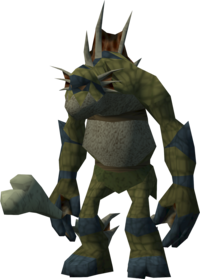 A River troll can be found in the Enchanted Valley, by fishing in the Fishing spots there, and in Court Cases. They have no level and its attacks are very weak and inaccurate.

As a random event[edit | edit source]

Before the update on 25 February 2009, river trolls were a random event that occurred while a player was fishing. These NPC monsters would appear and attack players when the player initially made an attempt to fish. They would say " Fishes be mine!" before attacking the player. The river troll's combat level used to vary depending on that of the player's, up to a maximum of level 159. Like most other random events at the time, the river troll could be fled from, as it only had a Melee attack.