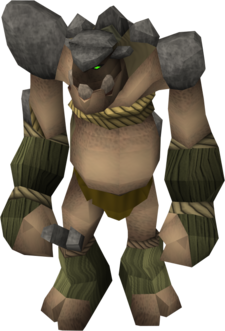 Trolls are one of the more unique, though not very intelligent, races of Gielinor. Whilst the main population exists within the mountainous troll country known as Trollheim, the race is quite widespread, populations being known to stretch as far as Piscatoris, Neitiznot and Daemonheim; populations of river trolls are also known to exist near most popular fishing spots.

They are something of an oddity when compared with other races such as humans or gnomes. Trolls are split into several different types which all differ from each other greatly. It is not currently known if these are different species of troll or different breeds. These differences reflect the troll race's hardiness, and ability to adapt to a number of extreme environments, although all trolls share some similarities such as their rocky appearances, their thick skins and their relatively low levels of intelligence.

Trolls are followers of Bandos, although unlike the other races, who are fanatically loyal to him, trolls seem to be rather indifferent.[1] This suggests that the trolls were simply recruited to his cause, similar to the cyclops race, as there was no mention of them hailing from Yu'biusk.

A map of Trollheim

Trolls have virtually no noted history. It is likely that the trolls keep no written or oral records of their race, and most humans to have had prolonged encounters with them have ended up being beaten to death or eaten.

There are few records of the troll race in the times before the Third Age, although it is known that at the beginning of the God Wars the trolls dwelt inside the same cave-systems and enclaves that they do now. After the dwarven race descended underground to escape the carnage of the war, they were often assailed by mountain trolls in a conflict that lasted for thousands of years.

After the God Wars, trolls continued to live in their native hills and mountains known worldwide as Troll Country, separating the Wilderness from the Fremennik Province. Oddly, the trolls, while violent and warlike in nature, do not appear to be seeking an expansion of borders. While they have been involved in many conflicts, chiefly with dwarves and, more recently, the town of Burthorpe, the trolls have stayed in their relative locations and made no attempt to push forward. Asgarnian scholars have puzzled over this for many decades, as logic would dictate that the troll race would have died out many generations ago. However, while unintelligent and primitive, trolls are hardy, resourceful creatures, and are able to live in the harshest terrains and most unforgiving, freezing lands in all of Gielinor, and have survived for several thousands of years on virtually nothing but their own instincts and ability to adapt to their surroundings with such ease, helped by the fact that trolls are omnivores, being able to eat most plants and animals.

Trolls are unique in the fact that, whatever their environment, they adapt and change in such drastic ways. There are several different types of troll depending on which area of Gielinor they reside in.

Trolls which dwell in caves and rock-like faces, such as Death Plateau and the Troll Stronghold are known as mountain trolls. These are the most prosperous and numerous of the troll races, and are involved in the most quests.

Important and notable trolls are generally from this breed and, though some mountain trolls are weaker than other breeds, they are generally known to be the most resourceful (and to a slight degree, more intelligent) - having obtained a farmer (with an adventurer's help), a head chef, assistant cooks and have constructed rough canopies to give them some cover. They enjoy fashioning primitive weapons from bone and granite.

Goutweed and rocktails are delicacies in mountain troll cuisine.

The other mountain-dwelling trolls which live in the harsher and colder regions, such as on Trollweiss Mountain, are known as ice trolls. Ice trolls are some of the most vicious and powerful of the trolls, violently attacking various civilisations on different fronts, such as The Fremennik Isles of Jatizso and Neitiznot, where honour guards find themselves often overwhelmed by both males and females of this sect. This tribe of ice trolls, it is worthy of note, have more of a leader-figure than mountain trolls or Trollweiss Mountain ice trolls, called the Ice Troll King. Ice trolls usually use wooden clubs, bones, and large rocks to fight, though they wield them with great accuracy and power. Although most ice trolls adhere to violence, those recruited by the Mahjarrat Bilrach in Daemonheim and small groups such as those featured in the Desert Treasure quest are known to be considerably more intelligent and less aggressive towards humans.

According to the troll child during Desert Treasure, when angry or upset, ice trolls are able to freeze the air around them. Whether this is a trait unique to the Trollweiss ice trolls or ice trolls overall is unknown.

Another lesser-known race of trolls, an aquatic species which dispersed all over Gielinor, are the river trolls, which were a discontinued random event, popping up in various fishing spots all over the rivers and seas on the coasts of Gielinor. They held large bones and attacked with melee, often dropping different types of raw fish. They can now be found in Enchanted Valley. They also appear in the Court Cases and Troll Invasion Distractions and Diversions.

Perhaps the most powerful and alarming species of troll is the elusive sea troll. Sea trolls are as vicious and nasty as their icy brethren, but they are far more organised and less primitive than any of the others. The majority of sea trolls wear and wield very little, only wooden clubs and odd armour fashioned from shells and old ship parts, mostly barrels, an act only repeated by the troll generals of the Mountain Troll Stronghold. Sea trolls are only found at the Piscatoris Fishing Colony, but it is assumed they dwell all over the waters and islands of the Northern Sea. Like the ice trolls, sea trolls have a leader of sorts, though it resembles more of an deep sea creature.

Very few troll females appear in game, them being Aga, Egg, Tiny Insect and the troll mother (as well as attackable ice troll females). Some events would suggest that male trolls often fight over females, the females favouring both heroic favours and feats of strength. There are a number of gender differences between males and females, most noticeably the females being much shorter, and having less 'rocky patches' on their skin, or the fact that female trolls have growths on either side of their head that slightly resembles longer hair.

Troll children are not unlike human children, they are curious, always playing and joking, crying when separated from their parents, and getting into mischief in general. They are very strong from a young age, and when born are named after the first thing the troll child attempts to eat, or what it says as it is eaten. This method of naming is what has lead to some of the more humorously named trolls, such as Pretty Flower, Dad, Drunken dwarf's leg and My Arm, although a troll is often very proud of its name regardless. Other trolls are named after the sound their first meal makes, such as Tilt, Flippa, Ug and Arrg. The only known troll children consist of the baby troll, troll child, Baby Shakes, Drunken Dwarf's Leg and Sparkly Crystal (as well as attackable ice troll runts).

Trolls received a graphical update during March 2011. They were one of the last races among fairies, gnomes and dwarves to still use graphics that dated back to the launch of RuneScape 2. They were given unique chathead animations as well as unique appearances based on location. For example, mountain trolls were given a rocky appearance while ice trolls were given fur. 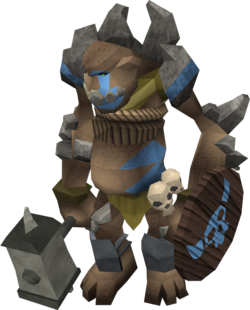 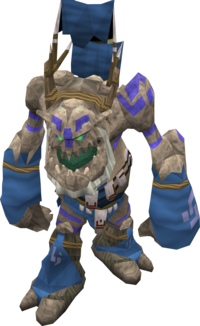 Trolls also feature in a number of diverse quests in RuneScape.