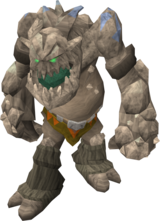 Cliff is a troll that features in the Distractions and Diversions Troll Invasion. All that is known about Cliff is that his name derives from the first thing he ate: an entire cliff face, the Forinthry Cliffs. This implies that he is very strong for a troll. He is fought in wave 20 of the D&D, or wave 7 if doing the harder version. Cliff has very high defence, but most of his damage can easily be negated by wearing armour with good magic defence, activating protect from Melee or Deflect Melee, and dodging his ranged attacks. However, players can avoid damage completely by standing out of melee range, activating protect from Magic or Deflect Magic, and dodging his ranged attacks.

A player can see Cliff's magic attack coming by observing a large rock, which seems to be cracked with lava, form at Cliff's hands and shoot toward the player. The player can use Protect from Magic when the rock is forming to negate the damage. Cliff will only use this attack when the player is out of his melee range.

A player can see Cliff's ranged attack by observing three rocks form and fly toward the player, converging slowly until they meet and hit the player. The player can use Protect from Missiles when the rocks are flying toward them to negate the damage. Cliff will only use this attack when the player is out of his melee range. The missile prayer may not work as expected. It is possible to step out of the way of this attack and avoid all damage as it does not track you like normal ranged attacks.

This is Cliff's most common form of attack. He can only use this when the player is adjacent to him, and his melee hits can deal extreme damage. For this reason, Protect from Melee is almost necessary. Cliff's melee attacks come in two forms. The first looks like a regular punch, while the second looks like he is pounding down with both fists.