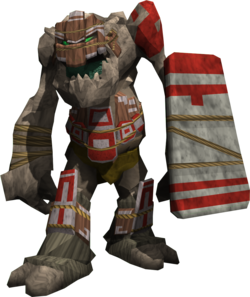 Anvil is a large troll lieutenant that attacks Burthorpe but is defeated by a passing adventurer and Sir Owen. He is found in the command tent. Defeating him is one of the Burthorpe and Taverley Tasks.

Anvil will only attack Owen, making it a risk-free fight for low levels. However, the player must deal the killing blow. Owen will recommend the player attacks the troll with magic, as its weakness to fire spells will make the fight quick and easy.

A building in east Burthorpe, after Anvil jumped into it from a cliff.