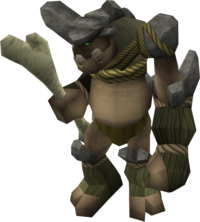 A Troll is fought during the Troll Warzone tutorial. During the tutorial, a group of trolls led by Morningstar attack the town of Burthorpe. Major Mary Rancour leads the defence against them, and the player has to fight one of them as part of the tutorial. During the fight with this troll, Corporal Keymans and Ozan aid you, although they are not able to deal much (if any) damage.

During the fight, the player is invincible, as when they reach low health they are automatically healed.