Vertida Sefalatis is a member of the Sanguinesti division of The Myreque. He is first seen in the quest The Darkness of Hallowvale, when the player arrives for the first time in the Myreque Hideout. He is the only one in the hideout at the time, and asks you who you are and what you want. When you explain your reasons, he calms down a little and tells you to talk to his leader, Safalaan Hallow.

Vertida seems to be a very good ranger, and has a bow and a quiver of arrows strapped to his back. By the looks of it, he is some kind of tracker for the Myreque, and likely goes out on scouting missions for them. He can always be found in the war-room of the Myreque hideout in Meiyerditch.

He appears to be second in command to Safalaan in the Sanguinesti order of the Myreque. When Safalaan disappears during The Branches of Darkmeyer, Vertida steps in as leader in his place.

Vertida will supply you with his bottle of holy water, which is essential for the boss fight at the end of the Branches of Darkmeyer Quest. If you drop the holy water at any time, because it is non-bankable, he will re-supply you with a fresh bottle. 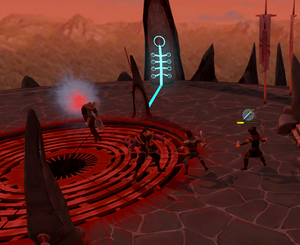 During The Lord of Vampyrium, Vertida Sefalatis assists the Myreque team in an attempt to kill Lowerniel Drakan. After taking up the vampyric disguise of "Vertigo con Cephalitis", the team makes their way into Castle Drakan, only for Drakan himself to see through their disguises and lock the team up in blood-sealed prisons. After escaping and failing to teleport out, Vertida helps to barricade windows and make way to the top of the castle to confront Drakan. Vertida Sefalatis is ultimately killed by Lord Drakan during the final confrontation when Drakan envelops Vertida as a cloud of deadly mist, healing Drakan in the process.

In River of Blood, his severed head is seen during a hallucination and questions the player if the player has found his holy water yet because it will make quick work of Vanstrom's pet bloodvelds.

In In Memory of the Myreque, a statue is built in his honour. It is revealed by Veliaf Hurtz that he preferred the blisterwood stake-thrower crossbow even to his old bow.

This information has been compiled as part of the update history project. Some updates may not be included - see here for how to help out!
Retrieved from ‘https://runescape.wiki/w/Vertida_Sefalatis?oldid=35606949’
Categories:
Hidden categories: