From the RuneScape Wiki, the wiki for all things RuneScape
Jump to: navigation, search
The Old School RuneScape Wiki also has an article on: osrsw:Radigad Ponfit
Loading...
StandardVampyre disguise

Radigad Ponfit was an Asgarnian mercenary who bore a grudge against the Drakans and so joined the Myreque.[1] He was a keen drinker of moonlight mead, which Veliaf Hurtz called 'rotgut' and admired him for drinking.[2] He had a deep hatred of vampyres, who he believed only viewed humanity as the next meal.[3]

He was present at the Myreque's base in the Hollows when an adventurer sought them out to deliver weapons. When Vanstrom Klause attacked, Klause killed Sani Piliu and Harold Evans. Afterwards, Radigad took over as the primary combatant of the group, being tasked alongside Polmafi Ferdygris to secure their new base in Burgh de Rott. When Veliaf Hurtz and Safalaan decided to unite the two branches of the Myreque to launch an assault upon the Lord of Vampyrium Lowerniel Drakan, Radigad was tasked with guarding the Sanguinesti base. He also created a pair of blisterwood sickles, which he named 'Harold' and 'Sani' after his fallen comrades. When the Myreque smuggled themselves into Darkmeyer and donned disguises, he took the name 'Rageguard Pain-fire'. They joined a party at Castle Drakan where several vyre nobles had gathered, awaiting an announcement from Lowerniel Drakan, though he disliked being pacified in the presence of so many vyres. They were caught and imprisoned alongside Vanescula Drakan before being freed by the adventurer. They escaped into the interior of Castle Drakan. Radigad helped defend against venator attacks and blocked windows, and saw the deaths of Kael Forshaw and Mekritus A'hara before having his neck broken by Lowerniel Drakan himself.

Later, the adventurer and Veliaf built a memorial statue to him. His severed head appeared during a hallucination during River of Blood, chanting the adventurer's name. 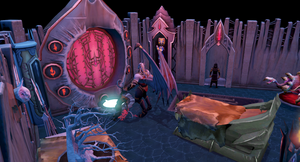