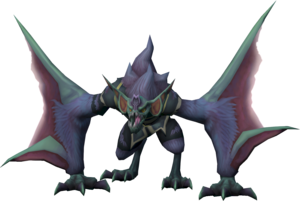 Safalaan was born to Queen Efaritay and King Ascertes. Much of his early life remained unknown, but this effectively made him a human-icyene hybrid. When Lowerniel Drakan invaded Hallowvale and forced Efaritay to surrender by capturing Ascertes, Efaritay sent a young Safalaan into hiding with his caretakers, seeing that Lowerniel would take great interest in Safalaan's latent Icyene powers. He assumed both his mother and father to have been killed - he was not aware that Lowerniel threw Efaritay into a cell in Vampyrium's Castle Drakan, while he converted Ascertes into a vampyre known as Vanstrom Klause.

Due to his Icyene heritage, Safalaan did not age like other humans and watched as Lowerniel plunged the land into darkness, with Icyene completely disappearing and the humans subjugated into food farms for the vampyres. Safalaan could not stand by and eventually formed a resistance known as the Myreque while remaining in hiding from the vampyres, working alongside Veliaf Hurtz and "Calsidiu", which the two made up to instill hope to new recruits.

Safalaan would lead the Sangunesti cell of the Myreque, performing operations that gained the peoples' support. They were able to evade detection by the vampyre authorities at every turn, making use of numerous hideouts.

He is first met during The Darkness of Hallowvale, when he is sketching Castle Drakan as the adventurer finds him. He is pleased to see them for the first time and asks them to sketch the exterior layout of the castle as he leaves. Just as the new Myreque recruit makes the last sketch, the vampyre Vanstrom Klause discovers and overpowers them. Before he is about to deliver the final blow, the secretary of Vanescula Drakan, a human named Sarius Guile, saves them and dismisses Vanstrom. She then reveals Vanescula has an interest in Safalaan and passes on information as to where to find a letter which contains information on an abandoned laboratory under Meiyerditch.

During the investigation, the letter written by a former slave in the laboratory, Mauritys Guile - Sarius's father, is found in a fireplace in a Meiyerditchian house which reveals the secret location and key of the laboratory. The adventurer is sent to investigate and finds a book called Haemalchemy - Volume I. The letter, along with the book, is passed on to Safalaan and he sends the recruit to Veliaf to deliever the information. 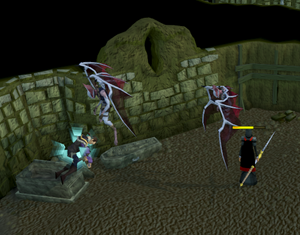 Shortly after delivering the information to Veliaf, Safalaan requested some supplies. The adventurer, who had returned with a disguised Ivan, was tasked by Veliaf to bring the supplies to Safalaan and his cell, suspecting that he might have extra work for them. Although they could fight off vampyre juveniles and juvinates, they could not fight against the vyrewatch. The adventurer quickly suggested the creation of a flail to Flaygian Screwte, and brought the materials for him. Safalaan then introduced the adventurer to Andiess Juip and Kael Foreshaw, before asking them to accompany the three to the Meiyerditch Laboratory to search for information.

When the adventurer arrived, they found the three dead, only to fall foul of a prank the three had implemented to bring the fear factor back in. The adventurer made an opening through the locked door and arrived at a chamber with the Blood altar. As the four began looking for clues, two vyrewatch appeared and killed Andiess. Safalaan then unleashed a blast of energy which caused the two vyres to flee. Not sure of what happened, the three returned to the hideout where Flaygian had left behind some blueprints for the proposed weapon. The adventurer returned with the Ivandis flail. Safalaan then sent the adventurer out to kill a vyrewatch with the weapon, and bring back its remains if it left some behind. They returned with a dead vyrewatch. Flaygian had not returned, so Safalaan told the adventurer to inform Veliaf of the new weapon and bring the corpse to Drezel, who might know what to do with it.

Safalaan told the adventurer not to tell anyone of his powers, as he wasn't even sure what it was in the first place. He also informed them that the mercenaries/refugees began to be attacked by groups of vyrewatch.

The following takes place during The Branches of Darkmeyer. 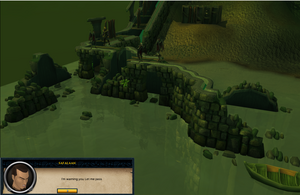 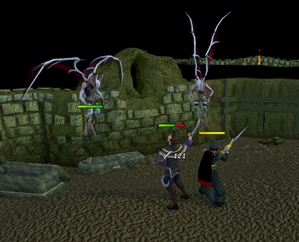 Safalaan is severely weakened by the vyres, activating his powers.

After seeing a shadow at night in Burgh de Rott and finding a mysterious medallion in a cave under the town, Veliaf suspects Vanstrom has finally discovered the town and sent the adventurer to Safalaan for advice and to deliver supplies. Safalaan is strangely able to enchant the medallion for it to gain some teleportation properties. Vanstrom has requested for Safalaan to meet one another, but the adventurer is sent instead, along with Vertida Sefalatis and Mekritus A'hara. Who was suspected to be Vanstrom turns out to be Vanescula, who wishes to aid the Myreque and Safalaan. She gives them her offer to deliver to Safalaan, who then starts contemplating on it.

In the mean time, the adventurer infiltrates Darkmeyer with the help of Vanescula, where they kill Ranis Drakan and Vanstrom Klause using Blisterwood weapons. Before the fight with Vanstrom, however, he reveals that Safalaan has always been his target, as he is half-icyene and the son of Queen Efaritay herself, which is also the source of his previously unexplained power blast. When the adventurer returns victoriously, Safalaan is gone, however. A cutscene follows, showing Safalaan saying goodbye to Vanescula at the entrance to Meiyerditch and promising to "start when he returns" before sailing off.

Safalaan did not go far; he simply spent his time at the Icyene graveyard, where he was attempting to learn more of his heritage. The adventurer finds and helps him to remove a vampyric seal, finding his mother's pendant, which seems to fill Safalaan with an understanding of his heritage and more of his powers. He then returns to Burgh De Rott to speak with Veliaf and Vanescula.

Safalaan joins Vanescula's attempt at taking down Lowerniel Drakan, taking on the disguise of "Deathly Hallows" and equipping a blisterwood wand. Unfortunately, Lowerniel is able to figure out the Myreque are not vampyres but humans in disguise, and puts Safalaan along with the other members of the Myreque behind blood-sealed prisons in the basement of Castle Drakan, which they are able to escape from. Once he escapes, he helps his comrades to their feet, but not without noticing and talking about a mysterious prisoner under an oubliette who he describes as having "been here so long she might as well be nobody". After a failed teleport escape attempt, the Myreque ascend the castle to attack Lowerniel, but not without Safalaan entrusting Vanescula Drakan with his mother's pendant. 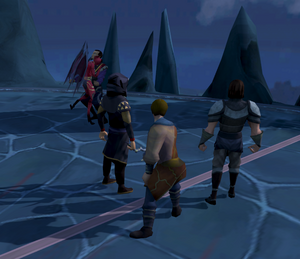 Safalaan, along with the rest of the Myreque, manage to catch up to Lowerniel and attack him, being pulled in and out of Vampyrium. The team is ultimately successful in killing Lord Drakan, but not without heavy casualties. The victory is prematurely cut short with Vanescula's betrayal to the Myreque, who then tithes Safalaan, seemingly killing him, and reveals that she plans to use his Icyenic blood as a way to bypass the River Salve. When she leaves, she takes his body with her.

In In Memory of the Myreque, a statue is built in his honour. It is revealed by Veliaf that Safalaan was his closest friend, and that while Safalaan may have been older than him, he made so many mistakes it was hard not to view him still being a child. Veliaf admits that now knowing of his heritage, perhaps he really still was a child, at least in icyene terms. Veliaf also notes that Safalaan's most consistent trait was one of faith - not in gods, but in the cause of the Myreque.

Safalaan was not killed as the remaining Myreque were led to believe, but had instead willingly converted himself into a Wyrd, with Vanescula stating that he would gladly die for his beliefs, which he appeared to do. Safalaan was kept on reserve after Vanescula met with the adventurer, who sent four juveniles to cross the river, only to turn feral. Seeing that Vanescula would not act, Safalaan proceeded to do so; since he was a Wyrd, who feasted on the pious energy of Saradomin's followers, he immediately attacked Drezel, fatally poisoning him in the process. The adventurer was able to stop him from attacking Ivan, before he was forced to flee when Efaritay arrived. 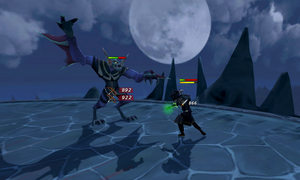 The player fighting Safalaan as a Wyrd, from atop Castle Drakan.

A book, Blood of the Hybrid, is found in the laboratory, which details how to reverse the vampyrification process. One of the ingredients is the blood of a hybrid, which the adventurer and Efaritay hope is the wyrd's. The adventurer finds Safalaan in a rejuvenation tank in the basement of Castle Drakan. He breaks and and poisons them, whom then makes their way to the roof of Castle Drakan to fight Safalaan. Despite being poisoned and disoriented, they are able to weaken Safalaan, with Efaritay calming Safalaan down so that he gives some his blood to serve as the hybrid blood, creating an Extreme Guthix balance potion. Safalaan drinks the potion, curing him of his bloodlust, but not his vampyrism as it was made from his own blood.

After strengthening the Salve and meeting Vanescula and her army again, Safalaan appears in wyrd form, initially ordered by Vanescula to attack. Instead, he transforms into human form and convinces Vanescula to make a truce. Post-quest, Safalaan admits his mistakes, exclaiming he was selfish and reckless, losing many friends in the process. He also speaks of his joint leadership of Morytania, alongside Vanescula and Efaritay, and the improvements they have planned for the future.

The adventurer then informed Veliaf of Safalaan's fate, who then proceeded to make his way to Castle Drakan. Safalaan was amused that Veliaf had taken his supposed death seriously, but was glad to see his friend again.