A Mort myre pear is a fruit used to fill druid pouches. It appears when the Bloom spell is cast, using a silver sickle (b) or Ivandis flail near certain "small" dead bushes in the Mort Myre swamp. It can be picked by using the sickle option "Pick golden pear bush." It can be used to fill a druid pouch by 3. 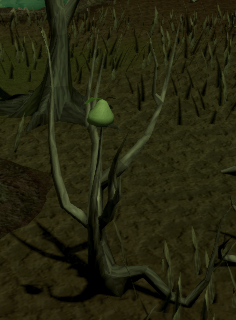 It is also required in the In Memory of the Myreque miniquest to build Mekritus A'hara's statue. During the miniquest, Veliaf Hurtz reveals that mort myre pears have medicinal properties which can quell a person's nerves, and as a result were the only thing that could calm A'hara down, even though they're hard to come by and even harder to deliver into Meiyerditch. During A Fairy Tale I - Growing Pains it is possible that Malignius Mortifer requires the player to get a mort myre pear, alongside 2 other items.

This information has been compiled as part of the update history project. Some updates may not be included—see here for how to help out!
Retrieved from ‘https://runescape.wiki/w/Mort_myre_pear?oldid=35953987’
Categories:
Hidden categories: