From the RuneScape Wiki, the wiki for all things RuneScape
Jump to: navigation, search
Smoke bomb? (edit)

30 smoke bombs can be picked up in a crate in the south-west corner of the Myreque Hideout in Meiyerditch during The Branches of Darkmeyer. They cannot be banked. A maximum of 30 can be held at any time.

They can be smashed on the floor in order to be hidden for a short time. This effect will remain if you move - the smoke will effectively follow you. They can only be used within Darkmeyer. 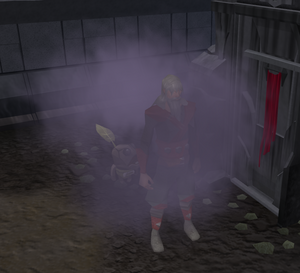 A player using a smoke bomb