From the RuneScape Wiki, the wiki for all things RuneScape
Jump to: navigation, search
The Old School RuneScape Wiki also has an article on: osrsw:Andiess Juip

Andiess Juip is a guard of the Myreque, a group of organised guerilla fighters working to remove Lord Lowerniel Vergidiyad Drakan from power in Morytania. Juip is protecting their base in eastern Meiyerditch.

Juip is believed to have been born and raised in Meiyerditch, a massive vampyre-controlled ghetto on the western border of the Sanguinesti region. Here, under incredibly difficult conditions, Juip was hardened, constantly having to remain strong to survive the vampyres' rotational blood tithes.

At some point in his life, Juip was recruited by the Myreque's Sanguinesti Order. Here, under their leader, Safalaan Hallow, Juip was trained in the art of combat. Stationed within their base, Juip was one of many prepared to give their lives protecting their people should their base of operations be discovered.

The Myreque, seeking to find a weapon capable of harming the seemingly-invincible Vyrewatch that patrol Meiyerditch, called upon the help of Flaygian Screwte. Screwte, one of their eldest and most intelligent members, was studying a book on Haemalchemy that had been recovered by an adventurer from the vampyre's blood lab in Meiyerditch Dungeon.

Deciding that the answer to fully understanding the book might lie in the abandoned caves beyond the lab, Safalaan Hallow called upon three of his comrades; the adventurer that discovered the book, Kael Forshaw, and Andiess Juip.

Juip, along with Safalaan and Forshaw, agreed to meet the adventurer in the haemalchemy lab. After the three jokingly pretended to be dead and scared the adventurer, the four united Myreque sought an entrance to the dungeon, where the vampyres had, until recently, performed horrible experiments on the human body. 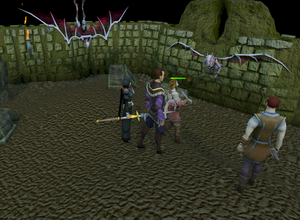 Once entering the dungeon's largest chamber, the four began to spread out, looking for some clue to the mystery. However, the three were soon beset by two Vyrewatch, intent on covering up the horrors of the dungeon. Knowing they could not harm the Vyrewatch, Safalaan ordered a retreat. Kael Forshaw managed to flee, but Andiess Juip was unable to escape in time, and was killed in the attack.

Safalaan, after defeating the attacking Vyrewatch with a strange, magical attack, managed to get the other two Myreque back to the base.

During River of Blood, his severed head can be seen on a bookshelf while the player is hallucinating. He remarks on how it is nice to see Kael Forshaw again.

During In Memory of the Myreque, a statue is built honouring his sacrifice. It is revealed that his body armour was created from snakeskin.

Andiess Juip has been graphically updated in August 2015 with the rest of the Myreque in preparation for The Lord of Vampyrium quest, which was released in September.

This information has been compiled as part of the update history project. Some updates may not be included - see here for how to help out!
Retrieved from ‘https://runescape.wiki/w/Andiess_Juip?oldid=35582868’
Categories:
Hidden categories: