From the RuneScape Wiki, the wiki for all things RuneScape
Jump to navigation Jump to search
The Old School RuneScape Wiki also has an article on: osrsw:The Myreque
For the group of related quests, see Myreque quest series.

The Myreque (pronounced my-er-KEY [1]) were a paramilitary resistance movement trying to liberate Morytania, the Vampyre infested lands across the Holy River Salve, from the grasp of the vampyre Lord Drakan and his underlings. The covert movement was split into two groups for ease, the Mort Myre Order (later called Burgh De Rott Order), and the Sanguinesti Order (sometimes known as the Meiyerditch Order). Both groups were trying to work towards defeating the evil and winning the territory back for Saradomin. The symbol of the Myreque is a Silver sickle, one of the few weapons that can harm vampyres. After the Lord of Vampyrium quest, the Myreque was officially dissolved. 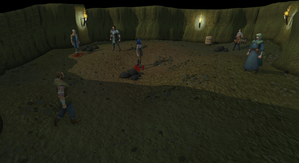 Formerly known as Mort Myre Order. Burgh De Rott Order's tasks is to provide Sanguinesti Order with necessary supplies and look for vampyre activity outside the Sanguinesti Region. They are situated in and around the Mort Myre Swamp, and their headquarters was located originally in the Hollows, but during In Aid of The Myreque, they moved it to the town of Burgh De Rott with the help of the player after Vanstrom Klause found the base and murdered two members of the Myreque. Veliaf Hurtz after the Lord of Vampyrium quest officially declares the Myreque to be dissolved, and therefore, is no more. 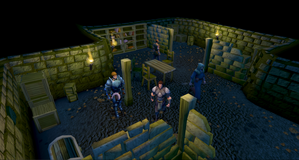 The Sanguine Order's task is to spy for vampyres inside the Sanguinesti region and help the populace of Meiyerditch to work against the Vampyres. Their headquarters is located below Meiyerditch, in a large underground barracks, filled with a supply of all that the Myreque need for their missions, including sickles. After Safalaan disappears, Vertida Sefalatis becomes the leader, but during the Lord of Vampyrium quest, all of the remaining members including Vertida were killed. As a result, Safalaan is the sole survivor of the Sanguinesti Order after Veliaf disbands the Myreque. 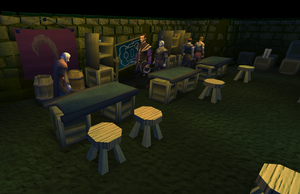 Other members and associates[edit | edit source]

The Myreque (which means 'hidden in myre') has been trying to put an end to the evil Lord Drakan's reign of terror over Morytania for some time.

According to Veliaf Hurtz, the Myreque was founded when Safalaan Hallow and a number of others escaped Meiyerditch in order to form a resistance. In recent times the Mort Myre Order has been shaken badly, first with the discovery of their base in Canifis (during the events of In Search of the Myreque, and then with the murders of Sani Piliu and Harold Evans by Vanstrom Klause, the group's main antagonist).

After the attack, they realised their base was no longer safe and had to go through the trouble of finding a new one. They have since relocated to Burgh de Rott, but during the toils of moving Ivan Strom left to go to Paterdomus, devastated that Sani had been killed (during the events of In Aid of the Myreque) the Mort Myre Order lost focus. After relocating both orders have gotten back in touch.

The Myreque soon discovered that werewolves had crossed the river Salve into Misthalin where they were kidnapping men and women and bringing them back to Morytania to be blood tithed by Drakan. Once the Myreque contacted King Roald of Misthalin he reacted by enabling a "Mercenary Protocol" but has been tied up with the Edicts of Guthix to actually launch a full scale invasion, so the only help the Myreque ended up getting was a few Mercenary soldiers trickling slowly into Burgh de Rott, being escorted by local heroes. With the two nations now coming closer to war the Myreque find themselves in a troubling situation.

After enacting the Mercenary Protocol (and reuniting Ivan Strom with the Myreque once more), a hearty adventurer assisted the Myreque with the development of a new weapon, the Flail of Ivandis, which renders the previously invulnerable Vyrewatch mortal. The tide of battle has suddenly turned in the Myreque's favour, as Drakan's winged warriors no longer present the threat that they once did.

However, this only made Vanstrom more persistent. Citizens of Burgh de Rott were kidnapped, and the town itself was surrounded by Vampyres. As the future looked bleaker and bleaker, a brave adventurer, with help from Vanescula Drakan, infiltrated Darkmeyer and killed both Vanstrom and Ranis Drakan, thus depriving Darkmeyer of two leaders. The Myreque have now garnered more respect than ever before.

During Lord of Vampyrium, the Myreque at last face Drakan head on, and was successful in doing so. The player was promoted to Lieutenant by both Veliaf and Safalaan and together, defeated Lord Drakan and thus, ended his reign on Morytania. However, it had a cost. The last of what was left of the Sanguinesti order was killed in action, and Safalaan Hallow, the leader of it, and Prince of Hallowvale, was killed by Vanescula Drakan. As being ultimately depressed by the death of his comrade, Veliaf officially dissolves the Myreque stating the "Myreque is no more", and therefore, ending the Myreque order completely operating in Morytania. Ivan, one of the last members of the order, returned to Drezel along with the Player. Veliaf is later seen at the graveyard and asked the former lieutenant to build statues in memory to his fallen comrades.