The castle sketch 1 is a quest item made during The Darkness of Hallowvale quest. It is made by using a piece of charcoal on a sheet of papyrus while standing on the north side of the castle at the north end of Meiyerditch.

The sketch must be given to Salafaan along with castle sketch 2 and 3 to complete the intelligence-gathering part of the quest. 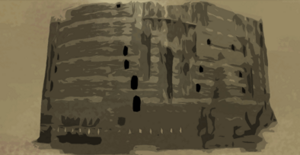 An unused castle sketch sprite can be found within the Jagex cache.
Retrieved from ‘https://runescape.wiki/w/Castle_sketch_1?oldid=30120623’
Categories: