The Ivandis flail is a two-handed melee weapon created by the player during the Legacy of Seergaze quest, from a silvthril chain, an enchanted sickle emerald (b), and the rod of ivandis. It is the weakest weapon capable of harming Vyrewatch. It is used almost exclusively by those who have not completed The Branches of Darkmeyer quest up to the point where the player learns how to craft the blisterwood equipment, which is significantly more effective against vampyres. Its base damage and accuracy are the same as those of a steel halberd, and it also has the increased attack range of a halberd.

Players with the above three components and a chisel in their tool belt may construct one after reaching a certain point in the quest. Using any of the parts on either of the others will craft the rod, granting 20 Crafting experience (in addition to the 20 gained by making the silver sickle emerald (b).

One is required in In Memory of the Myreque to build Flaygian Screwte's statue. An Ivandis flail upgraded with at least 200 burnt vyre corpses is also needed to complete the hard Morytania Task Shade-Shattering Ka-Bloom. 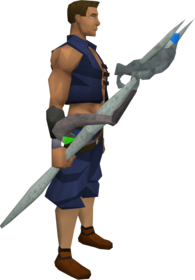 This flail is effective in damaging and killing the Vyrewatch because, despite their sufficient mind-reading ability to predict attacks and avoid damage, the flail is incredibly unpredictable and random. The sickle head further increases the unpredictability of the weapon. Thus, attackers do not hit the Vyrewatch in the intended way, rendering their mind-reading useless, but at the cost of making the flail a hard weapon to master.

The flail can cast bloom, the same as a silver sickle (b). This multiplicity of use lets a player kill Ghasts, Vampyre Juveniles, Vampyre Juvinates, and Vyrewatch with a single weapon.

For every 50 Vyre corpses cremated, the player obtains better equipment bonuses when using the Ivandis flail, blisterwood weapons and all variants of the sunspear. A message appears in the chat box "You feel more experienced with the Ivandis Flail." The current cremation count can be viewed either with the "Check" option on the flail when it is in the inventory or by searching the lectern at the south end of the columbarium.

The bonus to the equipment stats is invisible and doesn't appear in the "Show Equipment Stats" panel. The bonus is only effective when used against Vampyre Juveniles, Vampyre Juvinates, and Vyrewatch. The flail reaches maximum power after 500 Vyre corpses have been cremated. This is a requirement for obtaining the trimmed completionist cape and master quest cape.