Werewolf (The Lord of Vampyrium)

From the RuneScape Wiki, the wiki for all things RuneScape
Jump to navigation Jump to search
Werewolf? (edit)? (edit) 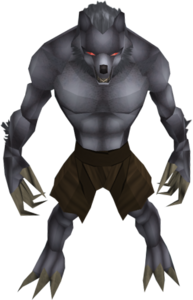 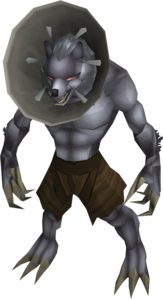 A werewolf can be found during the The Lord of Vampyrium quest atop Castle Drakan. Lady Nadezhda Shadum wishes to punish him for failing to cross the River Salve and collect blood, and gives players the choice between killing him, humiliating him, or neutering him. During River of Blood, he joins Vanescula's army at the Salve and openly disobeys her with the other werewolves after the river's barrier is reinforced.

He wears a "cone of shame", similar to that worn by sick dogs, although his includes silver spikes, indicating it might be more of a torture device. Lady Nadezha also talks about him as though he were a pet dog, and the option of neutering him is yet another dog reference. If it is suggested to put him down or neuter him, he will be resentful towards the player for their cruelty, but if given the cone, he states that at least only his pride is harmed.

This information has been compiled as part of the update history project. Some updates may not be included - see here for how to help out!
Retrieved from ‘https://runescape.wiki/w/Werewolf_(The_Lord_of_Vampyrium)?oldid=35722203’
Categories:
Hidden categories: