Mercenary Protocol is a military act prominent during and after the quest The Darkness of Hallowvale. It is enacted by the government of Misthalin in an effort to gain mercenary support in their fight against Lord Lowerniel Drakan.

The following takes place during The Darkness of Hallowvale.

During The Darkness of Hallowvale, players learn of Meiyerditch, a vampyre-run ghetto in the Sanguinesti region of Morytania. Here the black streets are crowded with dilapidated homes and starving citizens. The hundreds of humans kept here by the Drakan family live only to have their blood drained on a rotational basis. 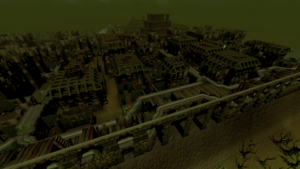 Meiyerditch as seen from its massive walls.

The Myreque, a group of rebel soldiers in Morytania, send the player to King Roald of Varrock to aid them in their fight against the Vampyres. Although Roald initially plans to retaliate with the Varrockian army, his Saradominist religious advisor Aeonisig Raispher argues otherwise. Doing so would likely violate the Edicts of Guthix, a set of holy laws that state that the races of RuneScape must not cause a war that would escalate to that of another God War.

Roald, after learning that werewolves were bypassing Paterdomus and preying on travellers, finds a loophole that would still assist the Myreque. This loophole is the Mercenary Protocol.

The Mercenary Protocol calls upon the people of Misthalin and other neighbouring nations to aid in the fight against Drakan. These mercenary fighters generally gather just beyond Paterdomus, where they await aid in their travel to Burgh De Rott, the base of some of the Myreque. Players aid these mercenaries in the Burgh De Rott Ramble minigame.

The payment for accepting the role of a mercenary is unclear. 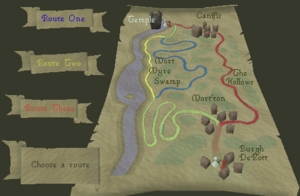 The Mercenary Protocol's effects were swift in aiding the Myreque. Almost immediately a flood of mercenaries arrived in Morytania, aiding the Myreque by fighting the vampyres and helping citizens to travel through Mort Myre Swamp to the safety of Misthalin.

During Legacy of Seergaze, the potential profit in burning vyre corpses attracts an even larger influx of mercenaries, reducing the amount of blood tithes enforced in Morytania's outlying settlements.

Return of the Gods[edit | edit source]

With the death of Guthix and the fall of his Edicts, as well as the return of the gods to Gielinor, the future of the Mercenary Protocol is uncertain.