From the RuneScape Wiki, the wiki for all things RuneScape
Jump to navigation Jump to search
The Old School RuneScape Wiki also has an article on: osrsw:Shadowy figure
This article is about the werewolf. For Sliske, see Sliske.

The two shadowy figures are non-player characters featured in a cutscene during The Darkness of Hallowvale quest. They are werewolves hunting humans to appease the blood tithes of House Drakan.

They appear when the player discovers a human body next to some bushes, prompting the werewolves to knock them out. One of them suggests they take the witness with them, but the other refuses, as it would be too suspicious. As a result, they take the body they hid and leave the player behind. It is unknown how they were able to cross the River Salve, though they probably did so in a manner similar to Fidelio, Canifis's general shop owner who had smuggled "exotic" goods from Misthalin. 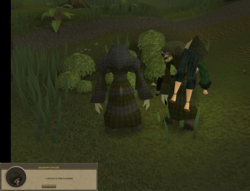 This information has been compiled as part of the update history project. Some updates may not be included - see here for how to help out!
Retrieved from ‘https://runescape.wiki/w/Shadowy_figure?oldid=35653014’
Categories:
Hidden categories: