From the RuneScape Wiki, the wiki for all things RuneScape
Jump to navigation Jump to search
The Old School RuneScape Wiki also has an article on: osrsw:Vyrewatch
This article is about the monster. For the title, see Vyrewatch (title).
For the clothing items, see Vyrewatch clothing.
For the higher-level Darkmeyer variant, see Vyrelord. 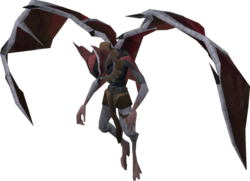 The Vyrewatch are the vampyric vanguard that receive Blood tithes from the population of Morytania and suppress any resistance to the Drakan overlords. They patrol the skies as both soldiers and lords of Meiyerditch and are known to randomly ask a blood tithe of any human who catches their eye, including the player. Vyrewatch also inhabit the various tiers of Darkmeyer, where some upperclass variants include Vyrelords and Vyreladies. In contrast to vampyre juveniles and vampyre juvinates, which consist exclusively of former humans, the vyrewatch, along with vyrelords and vyreladies, can be either true-born vampyres or the final stage of a human's vampyre transformation.

Vyrewatch can be fought; however, they are completely impervious to most weapons and poisons. Their only vulnerabilities are to the Ivandis flail, Blisterwood weapons, the Sunspear, and the Dreadnip (used as a poison). Notably, Blisterwood weapons and the Sunspear can kill most vyrewatch in just a few hits. Despite being vampyric, vyrewatch don't count towards a Vampyre slayer task, and instead have their own task category.

When killed, they always drop a Vyre corpse. (Conversely, they never drop Vyrewatch clothing despite obviously wearing it.) The Vyre corpses they drop can be cremated in the Paterdomus Columbarium. See Legacy of Seergaze for more details about cremating Vyre corpses.

Vyrewatch can be aggressive towards or suspicious of the player based on location:

The Vyrewatch east of Burgh de Rott and in Meiyerditch drop only corpses.

The Sunspear automatically cremates Vyres, so they will not drop corpses when killed by it.