From the RuneScape Wiki, the wiki for all things RuneScape
Jump to navigation Jump to search
The Old School RuneScape Wiki also has an article on: osrsw:Sani Piliu
For her statue, see Sani Piliu (statue).

Sani Piliu was one of the members of the Myreque and, at the time of her death, was the only female member.[1] When she was nine, her family was slain by a vampyre,[2] and spent time working for other people in order to survive.[3] One day, she bumped into Veliaf Hurtz in the Hair of the Dog tavern and signed up to the Myreque, hoping to avenge her family and escape west of the River Salve.[4] Amongst her skills was the ability to read people's auras, something which is considered strange and shady.[5][6] She dyed her hair blue using crushed pointed blamish blue shells.[7]

She was present at the Myreque's base in the Hollows when an adventurer sought them out to deliver weapons. When Vanstrom Klause attacked, she unfortunately met the same fate as her parents when he killed her and Harold Evans. Later, the adventurer and Veliaf built a a memorial statue of her in In Memory of the Myreque. Her severed head appeared during a hallucination during River of Blood, lamenting how she hadn't expected to survive as long as she did and that she thought she'd be the first to die. 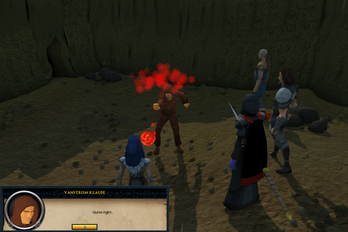 Sani is murdered by Vanstrom Klause.