Captured Meiyerditch citizens are inhabitants of Meiyerditch who failed to give enough blood in their last tithe, resulting in them being taken to a cell in the southwest corner of the upper-tier Darkmeyer for the sport of the vampyres.

Players can kill these during The Branches of Darkmeyer quest to gain status. They give 2 status per kill, and will respawn a short while after death. They can be killed without a Darkmeyer disguise, as they're fenced in and the jail guards can't fight you, but you will not receive any status. After you kill 60 captured Meiryerditch citizens, you will have gotten all the status attainable from killing citizens. 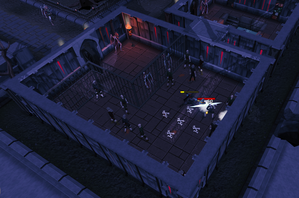