From the RuneScape Wiki, the wiki for all things RuneScape
Jump to navigation Jump to search
The Old School RuneScape Wiki also has an article on: osrsw:Ivan Strom
Ivan StromMercenary Adventurer'I Vanstrom'? (edit)? (edit)

Ivan Strom is the youngest member of the Myreque, and a trainee priest of Saradomin. A devout man often spending his free time in prayer, Ivan admires the Myreque but is worried to let them down because of his "poor skills". As a descendant of Ivandis Seergaze, he is said to have special powers, which is why Veliaf Hurtz deems him to be a target of not only Vanstrom Klause, but also Lord Drakan himself.

After the events of River of Blood, he takes over Drezel's role as caretaker of Paterdomus, and is one of the few remaining members of the Myreque. A number of items related to the series may be reclaimed from him. Ivan charges coins for some of them, which he claims will be used to help renovate Paterdomus:

With the Myreque[edit | edit source]

Much of Ivan's early years is unknown. He joined the Myreque at a young age, after his parents died in the Sanguinesti Region, though he still believes them to be possibly alive.[1] He trained under Veliaf Hurtz and the Mort Myre Myreque, though he was unsure why he was amongst them, rather than being at Paterdomus to train as a priest, and is fearful of disappointing them.[2] However, he has proven to be a valuable asset to the resistance; on one occasion, he managed to weaken a couple of Vampyre Juvinates in the field, allowing the rest of the group to safely escape.[3]

In 169, an adventurer was tricked by Vanstrom Klause, a very powerful high-ranking vampyre who was hunting the Myreque at the time in search of one of their leaders, Safalaan Hallow, and inadvertently led him to the Myreque base under the Hollows. After all of the Myreque members there introduced themselves to them, Vanstrom revealed himself and proceeded to kill Sani Piliu and Harold Evans before summoning a skeletal hellhound to finish off the others and leaving. A fearful Ivan stood in a corner of the cavern while the adventurer fought the monster, eventually managing to vanquish it. Ivan expressed relief that it had been killed, but also blamed them for bringing Vanstrom to them in the first place. 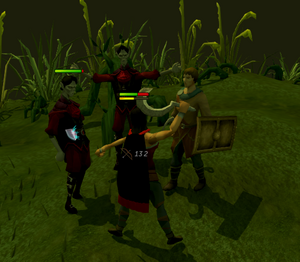 Ivan being escorted to the temple.

Following the incident, the adventurer offered their help to Veliaf to make amends and helped them relocate their base to Burgh de Rott. While they were patching up the town, Veliaf discussed the situation with Ivan and they agreed that Ivan would go to Paterdomus and complete his training under the watch of Drezel, so that Veliaf would not have to focus on keeping him safe and to protect him from falling into the hands of the vampyres, who desired to capture him. After preparing a new base for the Myreque, the adventurer returned to the Hollows to inform Radigad Ponfit and Polmafi Ferdygris of the new location. They then provided Ivan with some supplies and the two left the base to venture to Temple Paterdomus.

On the journey, the pair was attacked by two juvinates who were after Ivan, but the adventurer managed to defeat them. After safely arriving at the temple, Ivan went to see Drezel.

The following takes place during The Darkness of Hallowvale and Legacy of Seergaze.

While at Paterdomus, Ivan continued with his priestly training. His studies went well and Drezel even saw him as his potential successor as protector of the temple. However, recent events, Sani's death in particular, had shaken him considerably. Nevertheless, the priest noted that Ivan had an affecting "inner calmness" about him.[4] 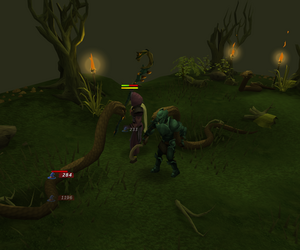 Ivan and the adventurer travelling through the swamp once more

At some point, he began hearing hushed, animalistic voices around the temple.[5] After Drezel began hearing them as well, the two investigated around the temple but did not find anything, although they were too afraid to get onto King's Road and search farther from Paterdomus. Later, the adventurer arrived to investigate and discovered these voices to be those of werewolves who had crossed the River Salve to kidnap people.

Shortly after King Roald of Misthalin instated a Mercenary Protocol to help fight the vampyres, Ivan decided to return to the Myreque. To this end, he disguised himself as a mercenary, somehow having acquired a full set of the rare rune armour, and waited to be escorted to Burgh de Rott. The aforementioned adventurer soon offered his help, but Ivan advised them to investigate some strange going-ons inside the temple first, as he had seen Zamorakian agents possibly convening with Saradominists. After checking with Drezel, they began to look around the temple, where they discovered a splinter group consisting of both Zamorakians and Saradominists discussing the Edicts of Guthix. After an encounter with two of their bodyguards, the adventurer agreed to escort Ivan to Burgh de Rott. 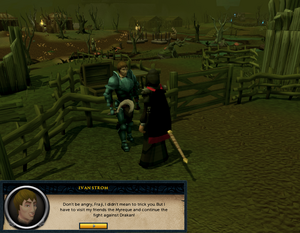 Following their trek through the swamp, Ivan revealed his identity and made his way to the base, to the adventurer's shock and Veliaf's anger. The lieutenant stated that it was too dangerous for Ivan to be there, and that he would require protection due to his powers.[6] Nevertheless, Ivan stayed, stating that Veliaf would "mellow with age" and was later glad to hear that both Vanstrom and Ranis Drakan himself had been killed with the aid of Vanescula Drakan.

Ivan was one of the Myreque members present for the attempt to assassinate Lowerniel Drakan, during a meeting of trueborn noble Vyres. When the Myreque attack was foiled the whole group was captured and imprisoned in the dungeon of Castle Drakan, along with the rest of the Myreque, as well as Vanescula Drakan and Overwatch Mornid. They were freed by the adventurer, who used their blood to open the locks on the cell doors, and the group headed up through the castle in a bid to escape.

In the castle cellars, Ivan and Mornid found a carcass of an unknown animal that had been drained of its blood. To the adventurer's consternation, Ivan ate part of the carcass, noting that it tasted like Myreque rations. Ivan took a large amount of the mysterious jerky as supplies for their escape, just in case. During the course of the Myreque's escape, the group was attacked by Venators, primal relations of vampyres used as hunting dogs on Vampyrium, sent by Lowerniel Drakan to hinder their escape.

When Ivan was searching Ranis' room for a means to charge a blood seal barring their escape, a Venator burst through the window he was standing by. Ivan was wounded by the attack, and rendered incapable of combat. During the battle with Drakan shortly after, Ivan was incapable of combat, and he supported the adventurer - who was doing most of the fighting - with his faith, restoring their prayer and healing their wounds during the pauses in battle, as well as supplying them with mysterious jerky. On the Myreque's return to Gielinor from Vampyrium, Ivan was one of those knocked unconscious by Drakan's attack. He regained consciousness in time to witness Vanescula's betrayal and attack on Safalaan.

After these events, Veliaf disbanded the Myreque, and Ivan asked the adventurer to take him back to Paterdomus so he could relay the story to Drezel.

After the disbanding of the Myreque, Ivan threw himself into his priestly studies at Paterdomus with Drezel. It had become obvious to the two that the holy powers of the Salve had become too weak to stop vampyres and werewolves from crossing over it, especially with Safalaan's Icyene blood strengthening them. On the request of King Roald, who was sending an army of his own through Silvarea, the adventurer asked Drezel and Ivan if they knew of any way to strengthen the barrier.

Drezel mentions an old book, deemed heretical Zamorakian propaganda by his predecessors and hidden in the library. Ivan supported the adventurer's search for it, annoyed that his mentor had hidden possibly valuable information. Once the book was found, and the truth of the Salve's origin revealed, Ivan says that maybe the missing pages were hidden in Ivandis' hidden tomb, and that they were desperate enough to try its advice even if it's sacrilege.

When Vanescula arrived with her army of vyres, werewolves and bloodveld, Ivan was among the group that went to meet her and tried to convince her to turn back. He told her that they'd strengthened the Salve and her vyres couldn't cross. After the juvinates Vanescula sends across were turned to feral vampyres by the Salve's powers, Ivan helped the adventurer defeat them. A strange creature then arrived, and tried to attack Ivan, who was protected by Drezel. Ivan helped the adventurer hold off the beast until an Icyene arrived to drive it away.

In his last moments, Drezel informed Ivan that he was the heir of Ivandis Seergaze, and named him the custodian of Paterdomus. After Drezel succumbed to the Wyrd's poison, Ivan was demoralised and considered that Efaritay was correct and Vanescula's army should be given free passage. He thought there was sense to her plan, but that the Wyrd was evidence that she didn't have full control over her vyres' bloodlust. He then told the adventurer that it didn't matter about Vanescula at that time, because the Wyrd was more important to deal with. The adventurer agreed, and left Ivan behind at Paterdomus to find a way to stop the vyre.

When the adventurer returned to Paterdomus with a version of the Guthix balance potion, one improved with the addition of the wyrd's blood and refined daeyalt, Ivan performed the strengthening ritual as the adventurer poured the potion into the well. This time he elected to stay inside in safety, as the adventurer went back outside to treat with Vanescula once more. Despite saying this though, he still followed the adventurer out, and witnessed Vanescula's attempt to send vyrewatch over, and the mutiny of the werewolves. In frustration, Vanescula ordered the Wyrd to kill Ivan to see if the Salve barrier would collapse with his death.

After the truce with Vanescula is agreed, Ivan is the sole priest left at Paterdomus. He is planning a renovation and reading Drezel's journal for advice.