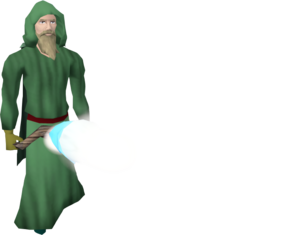 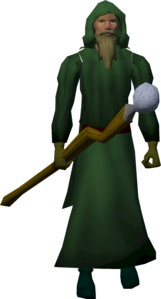 Cyreg Paddlehorn is a boatman in Mort'ton and an associate of the Myreque, located south-east of Mort'ton near the bridge that leads to Barrows Town. He can transport passengers to the centre of Mort Myre Swamp, near the Hollows, for 10 coins, but can be influenced by the ring of charos (a) to giving a ride for free. His family have been tracking the swamp for generations.[1] His boat can be a convenient way to reach the southern parts of Morytania, saving time and reducing the possibility of attacks from ghasts, vampyres and leeches.

When an adventurer was In Search of the Myreque, they were directed to Cyreg by Vanstrom Klause. He refused to help them initially, as he wanted to protect them, but when further questioned he gave information about the Myreque, the Drakans, and Morytania. He was persuaded to let them use his boat and gave them instructions on how to reach the Myreque, but first demanded they find ways to defend themselves against vampyres and ghasts then that they obtain planks and nails to repair damage to his boat and a bridge. He transported the adventurer who was unwittingly leading Vanstrom Klause to the Myreque. When he heard what had happened, he felt guilty over his role in the deaths of Sani Piliu and Harold Evans.[2]

It is possible to encounter him whilst Temple Trekking. He is one of the villagers who needs to be saved during the encounter where shades are attacking Mort'ton. If he is saved, he will bless the adventurer, either restoring their life points or prayer points or boosting their stats.