From the RuneScape Wiki, the wiki for all things RuneScape
Jump to navigation Jump to search
The Old School RuneScape Wiki also has an article on: osrsw:Queen Efaritay
Efaritay???? (edit)? (edit) 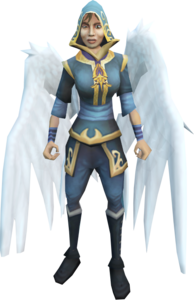 
• She seems very sad. Probably because her son is trying to commit matricide.


• She seems very sad. Probably because her son is trying to commit matricide.

Queen Efaritay Hallow was the legendary icyene queen of Hallowvale, wife of King Ascertes and mother of Safalaan. She now resides on the roof of Castle Drakan, after the events of River of Blood.

Born on New Domina, Efaritay was of important standing in Icyene society. When Saradomin came to Hallow, he encountered the Icyene and they eagerly followed their new god. Saradomin took the Icyene to Gielinor. Although Efaritay did not want to leave Hallow, she was duty bound to lead them on Saradomin's campaign.

As Gielinor had a faster night cycle compared to Hallow, the Icyene were naturally afraid at first due to their fear of the darkness. Saradomin reassured the Icyene that Gielinor was safer, though this did not quell their fear of the darkness. The Icyene created the city of Everlight, and Efaritay personally oversaw the construction of Everlight's lighthouse as a beacon of light for new arrivals, and to comfort all of the Icyene living in the city.

Efaritay and the Icyene spent no time in securing their new homeland from Saradomin's enemies. A castle was quickly constructed for her to reside in, and she began planning several projects to improve overall life in the city, such as a games stadium and a graveyard. The Icyene quickly took over the surrounding land east of the nearby river as a place of safe haven, which would allow her to send forces to attack enemies and quickly retreat back to safety when the operation concluded. The Icyene soon became allied with Saradomin's human followers, and Efaritay decreed that settlements be built for the humans, believing that they should not be alienated and that they could live with Saradomin's guidance.

During her rule, she met her future husband Ascertes, who she had romantic feelings for. If it were not for him, then she would have married to Archon Bable though she clearly despised him, believing him to be odious, but necessary because he held significant military influence. She told Saradomin of this, who told her to follow her true feelings, and she married Ascertes, having a child in the process.

Eventually, during the God Wars, Lowerniel Drakan, who had assisted Zamorak in his betrayal, was promised Hallowvale as a reward for his assistance. Lowerniel and his vampyres fought fiercely against Efaritay, her Icyene and human allies, but were unable to defeat them due to the Icyene's powerful martial skills. However, in an act of cunning, he was able to send several vampyres into Efaritay's castle, kidnapping Ascertes in the process. Archon Bable and most of the Icyene military fled east rather than hold Everlight as instructed, leaving Efaritay, her royal guard, and civilians behind. Efaritay decided to surrender, knowing Drakan's cruelty and to ensure her husband's survival. She sent her child away with two of his carers, hoping that they could take him to safety. She had several of her royal guard sabotage access to Everlight, refusing to let Drakan use it.

Following her surrender, Drakan took Efaritay to Castle Drakan's dungeon and imprisoned her.

Queen Efaritay is lost to history by the time of the battle of the Salve. The only remaining memories of the once glamourous and revered Queen Efaritay are mentioned in letters and documents, found in the once abandoned, now inhabitated city of Burgh de Rott, and in ancient books in forgotten libraries. On the basement wall of the run-down inn in Burgh de Rott, there still hangs a plaque, which reads: "Blessings on Efaritay, our Icyene Queen from far off lands and her loving children of Hallowed name."

And if that didn't convey her importance in those times, the ancient books of the secret library of the Temple of Paterdomus state it clearly:

“Eight centuries and score into the history of our land there came a darkness which fell about the land once called Hallowvale. The Queen of that sad time, an Icyene of once formidable power, became to be deposed by ‘his-dark-self’ and his hordes. Against all of her considerable will she was forced to kneel and attend ‘his-dark-self’ in order that she might save her loving husband Ascertes.”
- From an Ancient Book from the secret library

“…One such tale is of a Queen from a far away land of considerable power and revered by the peoples. It is also claimed that the peoples named the land ‘Hallowvale’ after her, though there is no true record of this.”
- From a Battered Tome from the secret library

A dialogue with Amelia and Rory refers to Efaritay; one of the children claims that Drakan killed Efaritay, the other one says that she wasn't killed.

She is first heard in-game as the mysterious ??? that is met during The Lord of Vampyrium, but it is first during River of Blood, that she reveals her true identity and fate. 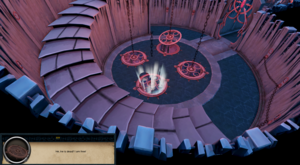 The oubliette is smashed open.

During The Lord of Vampyrium the adventurer encounters Efaritay as an unknown female who has been locked up in the original Castle Drakan on Vampyrium for a long time. She refuses to reveal her identity and refuses to escape due to the psychological hold that Lord Drakan has over her. After the adventurer kills Drakan, she is able to sense his death and breaks free of her cell. She manages to return to Gielinor by flying through the portal that Vanescula repeatedly opened to empty the Vampyrium Castle blood storages.

As Vanescula's army waits across the Salve to attack, the Wyrd arrives and kills Drezel, then tries to kill Ivan Strom. That isn't until an Icyene swoops down to stop the fight, the Wyrd throwing spat at her holiness. It then retreats, as does Vanescula and her army, as the unknown Icyene reveals herself to be the formerly Queen Efaritay. She is angered that yet again there are two armies waging war at Paterdomus. She leaves after, informing the adventurer that she can be found at the Icyene graveyard.

When spoken to at the graveyard, she will be calmer and explain why she was angry. She also reveals being the prisoner in Castle Drakan on Vampyrium at the end of the previous quest, managing to reach Gielinor when Vanescula reopened the portal to Vampyrium in order to retrieve the stored blood from the Vampyrium Castle's dungeon. She lets them retrieve her pendant, which makes her wonder how it returned there, after they inform her that they gave it to Safalaan before his death. This makes her wonder if Safalaan survived and became the wyrd that appeared at Paterdomus.

She lets them find out and appears on the roof of Castle Drakan, where they battle Safalaan together, forcing him to listen to them. After convincing him to give the adventurer some of his blood, they mix a potion which stills his hunger for blood. The adventurer then leaves and Efaritay remains behind to care for Safalaan. They later join them at Paterdomus, where they convince Vanescula into an alliance. After successfully doing so, they can be met on top of Castle Drakan after the quest.

When Everlight reappeared due to the time sprites bringing up the pillaged city up from the sea, Efaritay did not attend. Vanescula believes that it is due to personal reasons that she did not come, as it would bring up more bad memories than good.

Transcripts Efaritay is the author or co-author of: