From the RuneScape Wiki, the wiki for all things RuneScape
Jump to navigation Jump to search
The Old School RuneScape Wiki also has an article on: osrsw:Burgh de Rott 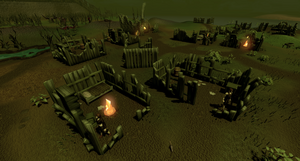 The decaying eastern part of the village, near the woods.

Burgh de Rott (pronounced "Bur-der-rot"[1]) is a ramshackle town located in the southernmost part of Morytania that serves as the base for the Myreque rebels. It is a focal part of the In Aid of the Myreque quest and can only be accessed if you start the quest; however, any player (even free players) could formerly visit it during the period when Gnomecopter Tours were active. Places of interest include the bank, the furnace, the general store, fishing spots, and the bar. The woods to the east of the town are full of Vampyre juveniles, Vampyre juvinates, and Vyrewatch. A boat on the east side of town can take players to Meiyerditch if they have reached a certain point in The Darkness of Hallowvale.

Hallowvale was a city located in the south of the Hallowland, named in honour of the powerful Queen Efaritay, an Icyene. Next to it, there was a small town known as The Burgh,[2] now known as Burgh de Rott.

At the early Third Age, Efaritay's husband Ascertes was kidnapped by Lord Lowerniel Vergidiyad Drakan, and she became Drakan's servant to save her husband. As the legions of the Sanguinesti region descended upon the Hallowland, the citizens of Hallowvale fled to the northern parts. After they abandoned their town, refugees fleeing the Sanguinesti region found the abandoned settlement. Those who couldn't flee inhabited it.

Due to factual disputes about the Fourth Age in Morytania, it is not known if Burgh De Rott has been permanently or periodically inhabited by humans.

Not seeing any life in the town, the Vyrewatch ignored Burgh De Rott, thus sparing the town from the blood tithe. In the year 169 of the Fifth Age, the Myreque (a group of rebels hoping to free Morytania from the rule of the vampyres) noticed its convenient circumstances and chose to make it their base of operations.

However, as they were cleaning up the town, the relighting of the village's broken-down furnace alerted the blood tithe collector, Gadderanks, to the town's location. The Myreque managed to fight off Gadderanks and the vampyres accompanying him before word could reach the other vampyres, and Burgh de Rott remained the only free settlement in Morytania, though it was constantly in danger of being noticed by vampyres. Residents of the town started to disappear under mysterious circumstances following the death of Vanstrom Klause, and missing person posters were placed looking for them.

The majority of the missing residents, either imprisoned in Castle Drakan or turned into vampyres, returned after the peace treaty was signed between Misthalin and Morytania and a cure for vampyrism was offered. 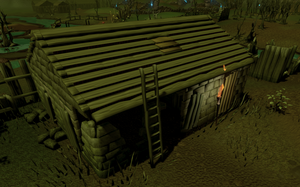 To use the general store you must repair it first using 6 planks and 24 nails. After repairing it you must stock it with 10 bronze hatchets, 3 tinderboxes and either 10 mackerel or 10 snails.

This store is notable as it is the fastest method for obtaining raw thin snails for thorny snail pouches. 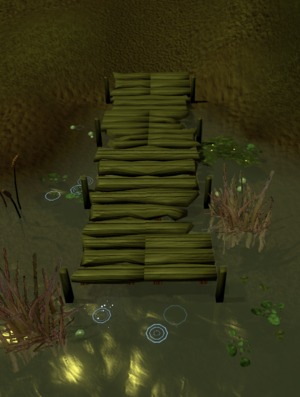 The docks south of Burgh de Rott, there are many fishing spots here.

All of the fishing spots along the coast of Burgh de Rott are net/harpoon fishing spots, where players can catch sharks or any fish caught with a big net. While not as close to a bank as other net/harpoon spots, the ones here are notable for their very close proximity to each other: a player fishing in Burgh de Rott will need to move only one or two spaces if their fishing spot moves or disappears.

Despite the abundant source of food in fishing, the community of Burgh de Rott is starving and has resorted to eating rats. 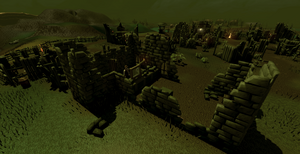 Bank must be repaired before it is usable. 5 planks, 1 swamp paste, and 20 nails are required to do so.

The Burgh de Rott bank is the closest bank for Tarn's Lair, Shades of Mort'ton, the Barrows and the Abandoned Mine.

There is a permanent fire in the closest building ruins east of the bank, making for a convenient location for a player to cook freshly caught sharks.

The furnace must be repaired before using. The repair requires 2 steel bars, a tinderbox, a hammer, and 1 coal. The furnace here is fairly close to a bank, although not as close as other furnaces, such as those in Port Phasmatys, Neitiznot, or Edgeville. It is common to be attacked by Vyrewatch while using this furnace, so it's not advised to use it for training Smithing.

A small obelisk is located just outside the town gates, where players can recharge their summoning points.

The woods to the east of the town are infested with Vampyre Juveniles, Vampyre Juvinates and Vyrewatch. This area was used to be called the Hallowglade before the Fall of Hallowvale. The close proximity of the bank in Burgh the Rott effectively makes this the best spot to kill these creatures. If you set out to kill them however, be sure to bring appropriate weaponry to combat them, such as: silver sickle (b), other silver weapons, Guthix balance potions, Ivandis flail or Blisterwood weaponry. This is also the ideal location for upgrading the Ivandis flail.

Notable landmarks include the four rockslides, which appear to be depleted ore deposits (a bronze pickaxe spawn near one of them further confirms this). Also, what appears to have been the gate to Hallowvale (now Meiyerditch) can be seen in the north-east part of the woods (part of the wall). There is also a road-like clearing leading to it.

In the top north-east corner of the area is a broken fence which can be crossed to access the Barrows, however the path through Mort'ton is a much shorter and safer route.

Amelia and Rory are two children, standing near the town's well. When spoken to, they will tell you about the events that occurred during the Myreque quest series. However, they don't know that it was you who did those things, so they will speak of 'the hero' or 'the heroine'. They also give some information about the various characters and groups encountered during the series. These are the Drakans, the Myreque and Vanstrom Klause. They were added to the game in the minigame rewards update on 23 August 2011. Both may be references to Doctor Who, as is one of Rory's lines, "bowties are cool".

Temple Trekking is a Members-only minigame in which the player must escort victims of vampyre rule from Burgh de Rott through Morytania to Paterdomus, the temple on River Salve, on the way guiding them through bogs and over rivers and defending them from dangerous packs of monsters, some unique to this minigame. This minigame is unlocked after completion of In Aid of the Myreque quest.

Burgh de Rott Ramble is the reverse route in which the player escorts potential Myreque recruits from Paterdomus to Burgh de Rott. This route is unlocked by completing The Darkness of Hallowvale. 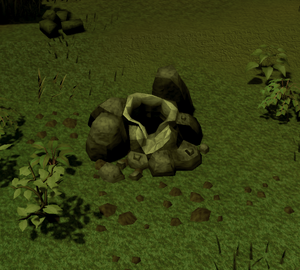 An entrance found near the bank

A cave entrance, south of the town's bank, leads to a small underground tomb. This area is used as part of the quest The Branches of Darkmeyer, and cannot be accessed beforehand. Inside is a sarcophagus, with the floor nearby marked with the symbol of Drakan. This tomb is where Drakan's medallion is originally found, and the medallion can be recharged by dipping it into the pool of blood found within the tomb.

A few Burgh De Rott residents in their homes. 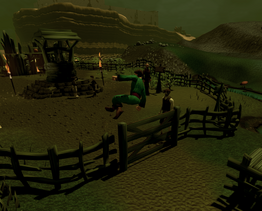 an update allowing you to jump over the fence.