From the RuneScape Wiki, the wiki for all things RuneScape
Jump to navigation Jump to search
The Old School RuneScape Wiki also has an article on: osrsw:Icyene graveyard 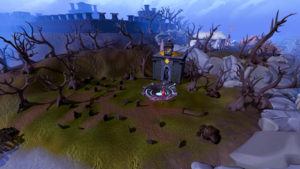 The Icyene graveyard is located between Meiyerditch and the Everlight Dig Site. It can be reached by using the shortcut in the south of the entrance area of the dig site. It plays a role in Archaeology, The Lord of Vampyrium, and River of Blood, and Safalaan can be found here during the first quest and Efaritay can be found here in the latter.

Tombstones and unfinished grave plots can be found scattering the area, with many tombstones depicting the names and a brief description of dead or fallen Icyene. Five of the tombstones are scratched out with animal marking and cannot be read.

In the centre of the graveyard is a small catacomb that holds a statue with Efaritay's pendant on it, which is what Safalaan was searching for. He notes that, curiously, the catacomb does not contain his parent's remains, but does contain a small staircase leading underground which is not accessible.