From the RuneScape Wiki, the wiki for all things RuneScape
Jump to navigation Jump to search
The Old School RuneScape Wiki also has an article on: osrsw:Shortcut key
Item JSON: {"edible":"no","disassembly":"yes","stackable":"no","stacksinbank":"yes","death":"always","name":"Shortcut key","bankable":"yes","gemw":false,"equipable":"no","members":"yes","id":"9662","release_date":"4 September 2006","restriction":"surface","release_update_post":"Myreque Pt III - Darkness of Hallowvale","lendable":"no","destroy":"Safalaan gave you this key as a reward for helping out in [[Meiyerditch]], you can get another key from him.","highalch":1,"weight":0.055,"tradeable":"no","examine":"A key allowing a shortcut into the Sanguinesti region. (Darkness of Hallowvale)","noteable":"no"}

The shortcut key is obtained near the end of The Darkness of Hallowvale quest. With the shortcut key, the time to reach sector 3 from the start is cut to around a third. There are two shortcut doors which are identified by the symbol of the key on them.

See the Meiyerditch shortcut guide for the route that requires the key.

The shortcut key can be added to the steel key ring.

This item is always kept on death, regardless of what other items the player is holding, unless the player dies in the Wilderness, in which case it is lost. 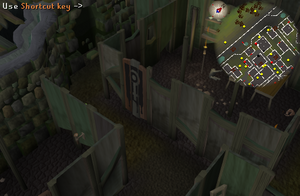 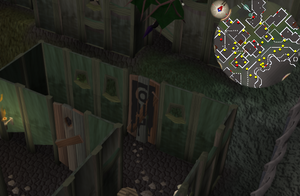 This information has been compiled as part of the update history project. Some updates may not be included - see here for how to help out!
Retrieved from ‘https://runescape.wiki/w/Shortcut_key?oldid=35680767’
Categories:
Hidden category: