From the RuneScape Wiki, the wiki for all things RuneScape
Jump to navigation Jump to search
The Old School RuneScape Wiki also has an article on: osrsw:Ourg 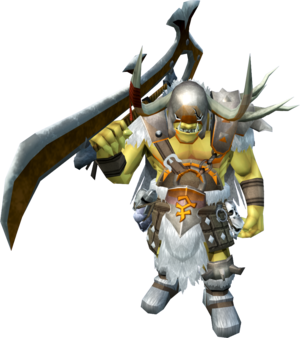 General Graardor, one of the last known living ourgs, wielding the weapon the ourgs made for Bandos 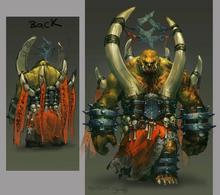 The ourgs are a nigh-extinct race of gigantic creatures from Yu'biusk and one of the most powerful races bred by the god Bandos. During the God Wars, they served as living siege engines: battering walls, hurling boulders, and taking on large forces by themselves.[1][2] Ourgs see themselves as the apex of Bandos' creations: stronger, smarter, and more loyal than all his other races. Ultimately, these traits led to their downfall. Most of the ourgs fell in battle, fiercely loyal to Bandos even after his eviction from Gielinor.[3]

Only two ourgs are known to have survived to the present day: General Graardor, who was trapped in ice since the God Wars; and Zarador, the last from a hidden enclave of ourg shamans.

The war god Bandos discovered the world Yu'biusk sometime after leaving his own. Yu'biusk was originally inhabited by groups of palaeolithic hunter-gatherers.[4] After installing himself as their god, Bandos selectively bred the population over millennia. From these original proto-Yu'biuskans, Bandos bred new races into existence. Among them were goblins, orks, ogres – and ourgs.[5]

At some point on Yu'biusk, the ourgs fashioned the kyzaj weapon to honour their god, as thanks for creating them. The ourgs battled to the death with the weapon, which was noted for its brutality. Bandos was greatly pleased. He adopted its shape as his symbol. And upon his subsequent invasion of Gielinor, he branded his soldiers with it.[6]

The ourgs fought for Bandos during Gielinor's God Wars. They were living siege engines of tremendous power: hurling boulders, battering city walls, and taking on entire units by themselves.[1][2] They also held some of the highest ranks in Bandos' armies. At least by the wars' end, the ourgs were directly beneath Bandos, leading his people via vassals.[7] Even after Guthix cast Bandos out, the ourgs kept fighting for their god. Over time, their numbers diminished, until they were all but extinct on Gielinor.[3]

On Yu'biusk, some ourgs had remained. Among them were a tribe known as the Goltholgor. These, too, were eventually rendered extinct. Left a world to himself, Bandos manipulated the races of Yu'biusk into creating stronger and stronger weapons and waging more devastating wars. Powerful weapons of war reduced Yu'biusk to an inhospitable wasteland.[8]

The ourgs of Gielinor were thought to have died out, until the Temple of Lost Ancients thawed out and one of the two surviving ourgs with it, General Graardor. The other is Zarador, the last descendant of a group of ourg shamans that went into hiding at the end of the God Wars. He became Bandos' chief engineer, who led Bandos' followers against Armadyl during Bandos's last war. Both ourgs eventually played a part in the Kyzaj Tournament, with one hosting and the other one participated in the tournament during The Mighty Fall.

In addition, Slash Bash from Zogre Flesh Eaters may have been an undead ourg, if not simply a giant ogre.[9] 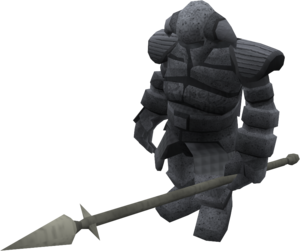