The Primordial realm is a part of the Abyss, which consists of the leftover "junk" the Elders used to form reality. It can be visited during the Stealing Creation minigame. It is the only known location that contains sacred clay, the material the Head mystic claims composed everything in the universe.[1] 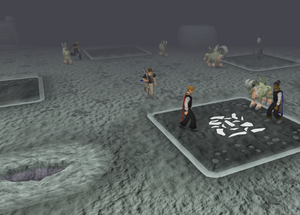 A group of players at the Primordial realm.

As there are no restrictions on combat in the Primordial Realm (other than the fact that you cannot attack members of your own team), many adventurers enjoy taking the battle more seriously by attacking their enemies as they gather resources, build items, and so on. This is also a good way of gathering clay, as any foes you defeat will drop all of their items (unless they have a Protect Item prayer active), which you can pick up and return to the tables in your base.

There are many Fog Banks found in this realm, in which one may completely conceal oneself.

Everything in the realm is made of sacred clay. This can be gathered by using skills, as the clay comes in the form of skilling spots, such as trees or rocks.