From the RuneScape Wiki, the wiki for all things RuneScape
Jump to navigation Jump to search
The Old School RuneScape Wiki also has an article on: osrsw:Puro-Puro

Puro-Puro is a magical world, separate from Gielinor, and is the main location for the Impetuous Impulses minigame. It is the homeworld of the implings, imp-like creatures who steal various items from the citizens of Gielinor, then flee to Puro-Puro via crop circles located throughout Gielinor. However not all implings manage to find their way back, and therefore some may remain trapped on Gielinor. In recent times the portal openings have remained for longer, allowing certain adventurers to find their way to Puro-Puro.

Puro-Puro contains all the types of implings, and players can gain access to it either at the Zanaris wheat field, which contains a permanent portal, or the various wheat fields around RuneScape, which have temporary crop circle portals. To use these portals, a hunter level of 17 is required. Players who have access to Zanaris can assist those who do not by talking to the wandering impling near the crop circle to find out where the temporary portal is located at that time. Players can simply step through a crop circle's portal to arrive in Puro-Puro. These portals can be hard to find.

If a player has a Magic box in their inventory, the player will not be able to enter Puro-Puro; instead, a message appears in a chatbox: "Something prevents you from entering. You think the portal is offended by your imp boxes. They're not popular on imp and impling planes." Familiars are allowed in Puro-Puro, but not beyond the central area and cannot travel through the wheat.

Crop circles spawn randomly in wheat fields across Gielinor. Crop circles can be predicted by talking to the Wandering impling near the Zanaris crop circle, but players with a bank handy can quickly take advantage of them when they do appear. Yanille, for instance, allows players training Construction (at level 50+), Teletab making or Prayer training (with POH Gilded altar), sand runs, ivy cutting, cooking, firemaking, and/or combat to regularly pass the wheat field.

"Camping" at a wheat field is generally not advised, unless doing other things while camping. The location of the portal is chosen randomly, and not in accordance to any pattern yet detected.

Currently the maze is the only accessible feature of Puro-Puro, and contains a number of implings of varying types. Large and square-shaped, the maze is constructed of walls of wheat which can be pushed through (awarding Strength experience), although every now and then sections in the wheat walls become "Wilting wheat" for a couple of seconds before disappearing, opening small passages through the walls. It will soon grow again, becoming "Growing wheat" for a few seconds before becoming a "Wheat Wall" again. This maze is different from traditional mazes in that the player starts in the centre of the maze instead of outside the maze. By venturing out of the centre of the maze, the player will find implings flying around, and imps walking.

To enter Puro-Puro, all the player needs to do is enter a portal (the best one is in Zanaris as it is permanent) and he will find himself in the centre of the maze. However, to enter the actual maze, one needs a Hunter level of 17, which is required to catch the lowest level of implings, baby implings. Elnock Inquisitor is located in the centre of the maze, and will give the player advice and instructions for the Impetuous Impulses minigame as well as exchanging rewards in return from various implings.

Non-Zanaris portals may be found springing into existence in wheat fields throughout the world. They are heralded by an imp walking in circles. The imp cannot be attacked, and will vanish after a few circuits, leaving a portal in its wake. The portal will last for a variable amount of time before moving to a new location. In addition to the visual cue of a crop circle, and the audio of "rustling wheat", players travelling close to an active portal may notice that their music briefly changes. 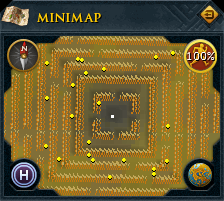 A screenshot of the minimap of Puro Puro captured when connection was lost immediately after login.

During March 2010, some updates were made:

Due to the magical nature of Puro-Puro, the maze is constantly changing, with new walls and passages appearing every few minutes. This magic also hides the minimap from the player, so it cannot be used for travel. However, the minimap is visible for a brief period upon entrance to the maze or login. If players try to enter the maze with a follower, the following will appear in their chatbox: "Your little friend refuses to walk through the wheat."

Imps will periodically attempt to "free" implings players have in their possession. If they succeed, players will need to pick up the impling jar that is removed from their inventory. The higher a players level in Thieving, the less likely the imps are to succeed. It is generally, but not always, possible to recapture the impling freed if one is quick.

Imps will "lock on" and follow players who remain stationary for several seconds. Several imps may do this at the same time. Any imp stalking a player will attempt to relieve them of an impling as soon as they can. This can make getting back to the centre of the maze a bit more interesting. This behaviour can be avoided by simply moving around slightly every few seconds. Further, moving far enough away will cause stalking imps to lose the player and revert back to their normal wandering around. It is theoretically possible for groups of players to clear portions of the maze of imps by getting them to "lock on" and then leading them to other areas.

Puro-Puro is the place of ours. We found it. Many others wanted to go there and their desire attracted us to it. Now adventurers come and play with us, desiring our things. It makes our bellies fat and keeps us happy. Dragon stuff? We found it in secret places. Many different worlds, many different places. All hidden. Deep down, in the darkness. Huge piles of things. Left for a long time, though their masters begin to stir.

Dragon Impling, Postbag from the Hedge