From the RuneScape Wiki, the wiki for all things RuneScape
Jump to: navigation, search
The Old School RuneScape Wiki also has an article on: osrsw:Shadow Realm
Not to be confused with The Shadow Realm. 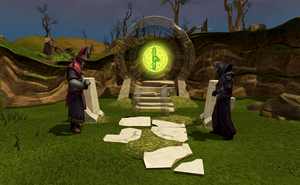 A view of the World Gate from inside the Shadow Realm.

The Shadow Realm is omni-present in the universe and in many ways is akin to another layer over individual worlds.[1][2] Although it seems to be part of the universe itself, it in some ways resembles another dimension as unique forms of life are present and the nature of the realm is different from the worlds they parallel.[3][4][5] Players are able to see into it with the ring of visibility, and become part of it with the ghostly robes.

The Shadow Realm is discussed at length by a dragonkin in The Shadow Realm, who mentions that most of what is known about the realm is misleading. He claims that it is not a realm,[6][2] but an expanding part of the universe that stretches increasingly over all present worlds.[7] The Realm is filled with 'shadow' that gets thicker the lower one travels into it, and at a point, the shadow is so thick that not even Gods can traverse it.[8] Various monsters reside in the Shadow Realm, some examples being the Shadow cackler, an individually weak monster whose powers amplify in large groups, and the shadow leviathan, an extremely powerful monster that has adapted to the dark and only seeks to hunt out any sources of light. It is well known for its power that even Zaros is intimidated by it.[9]

Sliske is mentioned by Zemouregal, Azzanadra, and Wahisietel as being particularly skilled at reaching into the Shadow Realm, although Wahisietel claims that Sliske was better at manipulating the Shadow Realm of Freneskae.[13] Sliske experimented on the original six Barrows brothers within the Shadow Realm, causing them to be greatly enhanced, in addition to granting them some powers over the realm. Even though Sliske has a great understanding of the Shadow Realm, Mod Osborne stated that Zaros had a better understanding than Sliske about the Shadow Realm, at least for Gielinor.[14] In the beginning of Fate of the Gods, Sliske brings the player into the Shadow Realm, which looks exactly like the normal plane of existence but with muted, darker, and greyer colours. If the player decides to leave at this point, they will retain this Shadow Realm colour scheme (while interacting with the world as usual) until they log out. In Dishonour among Thieves, it is revealed that Sliske experimented more on the Shadow Realm, causing most of the Mahjarrat to have difficulty entering the realm, with some being completely unable to. It is also shown to have preservative properties, as Palkeera's body is well preserved when found within the realm, despite her death occurring millennia before.

The KGP are also conducting experiments into the Shadow Realm, and have managed to have one of their spies enter the realm.