The Spider Realm is a realm parallel to Gielinor, much like Yu'biusk and the Fisher Realm. Though one might believe it is merely a lost or secluded location upon Gielinor, the RuneScape Game Guide describes the realm as "a plane connected to" RuneScape. The Spider Realm is a dark, empty place which is inhabited solely by Spiders, and each of the levels are made up of gigantic spun webs which must be navigated across in order to reach the top. The realm is ruled by the Spider Queen, a large arachnid monarch who sits alone in her chamber, whom the player must speak to in order to help the Grim Reaper out. The player visits the Spider Realm during Web of Shadows, the 2009 Hallowe'en event.

The portal to the Spider Realm, ejecting a player back to the Reaper's house.

The only way to access the Spider Realm is through the portal in the Grim Reaper's house, during the 2009 Hallowe'en event, called "Web of Shadows". There, after investigating the Reaper's trouble with a spider in his bathtub, he will open up a portal to the Spider Realm and allow the player to go through. 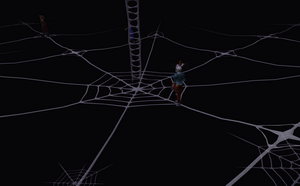 The first floor of the Spider Realm
The first level of the spider realm.

The first level of the Spider Realm is an enormous web, with strands that must be balanced on to reach the centre, where a ladder can be climbed to take the player to the next floor of the area. Many strands of web are weak and will break when stood on by humans, returning the player to the portal at the beginning of the area. This puzzle is reminiscent of the floor-traps in the Underground Pass quest and the "Where am I?" portion of Lunar Diplomacy where players have to find a safe path to the next area without failing. The correct path changes from player to player, so trial and error is the only way to truly find the way to the upper levels of the realm. 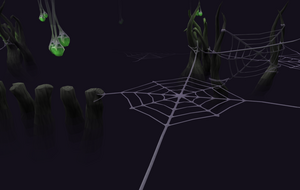 The second floor of the Spider Realm 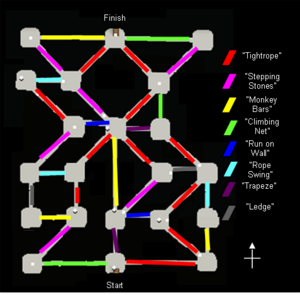 A map of floor two of the Spider Realm

The second floor of the realm is another large mesh of silk webs, creating a giant agility course. Players can traverse the area by swinging on webs, running across walls, balancing on tree-stumps and shuffling along edges. At the end of the course, there is a ladder which leads players up to the next level. This part of the realm was likely implemented to give Free-to-play adventurers a taste of the Agility skill and the layout is somewhat similar to the Brimhaven Agility Arena, although, unlike most agility courses, Brimhaven included, players cannot fail on the obstacles, and the webs will not break and cause players to go back to the beginning, as they do on the first floor. 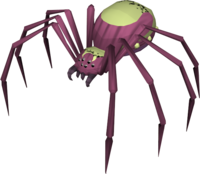 The third level of the realm is the Spider Courtroom, where the seven members of the Spider Court are gathered, along with several small Spider Courtiers. The Spider Herald is the head of the Spider Court and the Queen's direct underling. Players must speak with the Herald and convince him that they are an emissary for the Grim Reaper, in order to receive an audience with the Queen. He will also speak to you afterwards and assign Eek the Spider to help you sort out the problems you have. When you mention you are a messenger for the Reaper, he seems to become afraid, as if Death will come for him.

The fourth floor is the Spider Queen's bedding chamber. Here the Queen sits, surrounded by egg-sacks, and is waited upon by her Court. The player must visit this place several times during the Hallowe'en event of 2009 in order to complete the event and receive their rewards of Eek as a pet and the Web cloak.