From the RuneScape Wiki, the wiki for all things RuneScape
Jump to: navigation, search
Not to be confused with Spirit Realm. 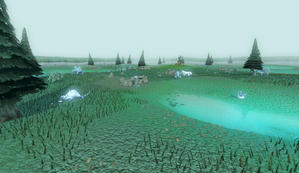 The Spirit Plane is a plane of existence from which Summoning energy can be used to summon creatures called familiars. Although very little is known or seen of it, it appears to be a lush, wooded plane in which spirit shards are abundant. The plane is inhabited by a wide variety of spirit creatures, some of which greatly resemble creatures native to other worlds, while others are unique. The exact nature of the Spirit Plane is unknown. Some have claimed that it is an underworld for creatures of limited consciousness,[1] whereas the Amlodd Clan believe that its inhabitants are ideas made manifest.[2] According to Lady Hefin, the plane can act as a dream place, playing on the subconscious desires of whoever enters it, but this theory is refuted by Lord Amlodd.[3]

The most well-known inhabitants of the Spirit Plane are spirit creatures called familiars. Although they often appear to look like normal animals, these spirits posses a variety of supernatural traits. According to Lord Amlodd, they do not require to eat, but do so anyway; he theorises they are sustained by a connection between the worlds and feed on the memories of others.[4] Some Familiars, such as the Pack Yak, posses memories of a life before becoming spirits. The Pack Yak claims that it moved beyond its physical body and became the "spirit-ancestor" of its people.[5] When a familiar is summoned, it does not come to Gielinor in its entirety. Instead, summoning takes a small shard from the familiar's being, which later rejoins the whole with new experiences.[6] These shards cannot remain on Gielinor indefinitely; to maintain their link to the Spirit Plane, familiars require a constant supply of energy: the Summoner's summoning energy. More powerful familiars require more energy to remain on Gielinor and as such can only be summoned by powerful summoners.[7]

The prime incarnations of familiars are known as Elder Spirits,[8] and Pikkupstix's ex-apprentice Lunatrix went insane when he angered them by trying to commune with them.[9] Mohegan is the original Spirit Wolf, from which the other Spirit Wolves originate.[10]

A race of sentient humanoids known as the gorajo are also known to inhabit the plane.[11] Unlike most of the other residents of the plane, players can only summon them within Daemonheim, as they have dedicated themselves to thwart Bilrach.[12] The gorajo are known to accomplish this using a process known as a 'spirit wake,' which allows them to transfer their consciousness to a spirit form on Gielinor.[13] Although gorajo who die in their spirit form do not die in their real form as well, they must rest afterwards for one week due to sustaining wounds.[14] Some gorajo are known to have travelled to Gielinor without the use of a spirit wake, such as the Ramokee Skinweaver, and have gone as far as the Eastern Lands.[15]

The Mahjarrat Akthanakos was able to use the Spirit Plane to create new creatures. By making camels tell stories of Camel Warriors, the latter slowly started to manifest on the Spirit Plane. He then permanently summoned them by switching them out for normal camels.[16]

A map of playing area within the Spirit Plane.
Main article: Familiarisation

The druids need to make regular trips to the Spirit Plane to replenish their supply of spirit shards. Spirit shards are shards from obelisks, but only the obelisk in the Spirit Plane is correctly attuned, giving the shards the properties necessary for summoning and binding a familiar.[17] The druids project their consciousness onto the plane to gather raw shards, a process known as familiarisation. This is a mentally exhausting activity and can therefore only be performed once a week. Once the raw shards have been gathered, they are then attuned to Gielinor, creating a link between it and the Spirit Plane.[18] Recently, some druids haven't been returning with shards, being stopped by the spirits; and rogue spirits have begun to manifest on Gielinor. As a result, the spirit plane is filled with discarded shards. [19] The player can aid the druids and retrieve the lost shards in the Distractions and Diversions game Familiarisation.

Familiarisation's area looks fairly similar to Gielinor, but features a desaturation in colour for the environment, and the familiars that roam the area have an inversion and desaturation of colour as well (although this may simply be an illusion of the mind created through the familiarization process). An Obelisk is featured at the centre of the area which can be used to leave the Spirit Plane.

The objective of that activity is to collect as many raw shards as possible, in a certain time and by avoiding the "enemy" familiars. The maximum number of raw shards is 60. When you are running in the Spirit Plane your run percentage will decrease significantly, up to 4 times faster then usual.