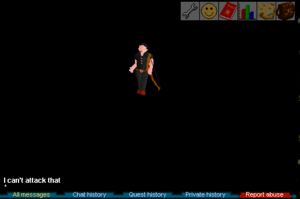 A player in the Black Hole

The Black Hole, also known as Thordur's black hole, was Jagex's early punishment system back on RuneScape Classic, before the banning system was implemented. Players who were misbehaving were sent to the Black Hole. It existed throughout most of 2001, but was removed by December of that same year.

A lot of players began deliberately misbehaving to see what it was like to be inside of the black hole, so eventually Andrew Gower programmed a clone of the Black Hole, dubbed "The Black Hole Experience". Players went into the western section of the Dwarven mine (where Boot the Dwarf can be found on present-day RuneScape) and purchased a Disk of returning from a dwarf named Thordur for 10 coins. Once a player had a disk in their inventory, they were allowed to go down the ladder into the mock black hole.

The Black Hole Experience was eventually removed, along with the real thing, due to players attempting to scam one another by claiming that "something really cool" would happen if players dropped the disk while in the hole, effectively trapping them until Jagex rescued them. This was before the game system could prevent players from dropping certain items, and almost 6 years before the Lumbridge Home Teleport spell was added to the game.

In Runescape Classic, if players were to visit Boot the dwarf, they could see a blue dot on the minimap (indicating the presence of an object) out in the distance where the Blackhole used to be. When focused on, it is clearly a table in the midst of the void - likely left behind unintentionally during one of the various reworks to the area.

Today, in RS3, an area that could be reminiscent of the Black Hole can be seen from Hura's crossbow shop in the Dwarven Mines. It looks to be just a hilly black field on closer inspection, but could more than likely be just filler area between the dwarven mines and the Taverley Dungeon.

Issue 6 of Postbag from the Hedge (released in April 2006) gives the in-universe reason of why the Black Hole was removed.