From the RuneScape Wiki, the wiki for all things RuneScape
Jump to navigation Jump to search
The Old School RuneScape Wiki also has an article on: osrsw:Abyssal Space 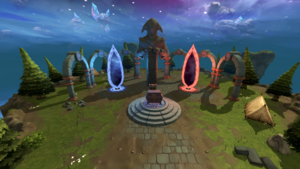 The Abyss, also known as the World between Worlds[1] or the Infernal Vestibule, is the plane that sits between and around every other plane of existence, holding them together like a "glue". Its relationship to other planes is sometimes compared to that of a tesseract or hypercube.[2] It contains the leftover pieces of the universe's previous revisions. Surrounded by it is a thin membrane, encompassed by the Void. The laws of space and time operate differently in the abyss, allowing it to function as the primary medium for teleportation and inter-planar travel.

It is unknown what the empty space of the abyss truly looks like; only smaller subsections of the plane have been seen. The Shattered Worlds activity features an excursion into a section of the Abyss corrupted by the energies released from teleportation, and the player may visit the inside of a banished chthonian via a mage.

Properties and use in teleportation[edit | edit source]

Space and time work differently in the Abyss than they do on Gielinor. Someone can enter and leave it at a nigh-identical spot yet find themselves many miles from their original location, and time passes at a slower rate. This allows the plane to be used as the primary medium through which teleportation is possible. [2] Human wizards had great difficulty solving the problem of teleportation because spells require a line of effect from the caster[3] but teleportation necessitates bypassing obstacles. This was circumvented by angling the spell through another plane: the Abyss.[4]

Teleporting this way works by first boring a hole, known as a teleportation matrix, through the abyss and then looping back around to our plane. Travel to other planes can also utilise the Abyss as a medium, but this takes considerably more power. Each teleportation spell has been carefully calculated for speed and distance so that the traveller arrives at a predetermined point on Gielinor.[2] Time spent in the Abyss only amounts to a split second. Creating a new teleportation point can take years of research.[5] In some cases, Aetheric thread may exist within the teleportation matrix, which keeps the passage open for a return trip. Straddling also allows travel through the Abyss, although with some additional effects.

Rarely, the teleportation spell might fail and a mage can find themselves in the abyss without having exited. This was how the ZMI gained access to the plane, by deliberately teleporting over and over until the spell failed and then establishing a direct portal.[2]It was also the basis of the discontinued Lost and Found random event.