Naragun was the home of the Naragi race, before both they and their world were destroyed as a result of the Naragi God Wars. The god of balance Guthix, a Naragi himself, was originally from this world, and he shows adventurers his memories of it during The World Wakes, before he lies down and dies.

Although players are not actually able to visit it, they can view their memories of it after The World Wakes by using the fairy ring code AIS. As in The World Wakes, the scenery in the realm can be investigated, although the text differs slightly.

Guthix's memory of Naragun consists of what appears to be giant trees supporting shattered floating islands, which have leaves dangling from the bottom of them. Lights can be found dangling from the branches on the sides of these islands. Shattered paths connect some of the islands, which have tree roots flowing through them, and purple plants of varying sizes can be found growing around the islands.

Corpses of the Naragi can be found strewn throughout the realm, and the corpse of the god Skargaroth can be found just east of the fairy ring that grants access to the realm. The body of one of Tuska's followers can be found a short distance north of it.

Ruins of structures can be found strewn throughout the realm, consisting of pathways, arches, and buildings, although not much is left of them. What appears to be a symbol of the god Saradomin, who was the first god to arrive to the realm, can be found on a disc-shaped platform to the far east, and the remains of a ruined temple to one of the many gods that fought in the wars can be found to the north-east of it.

Guthix's house is located in the north-west of the realm, marked by a stone tablet reading "Shelter available. All aided." It is the most complete of the buildings in the memory, likely as a result of it being the last surviving structure until it was crushed by Skargaroth and Tuska, and Guthix's strong memory of it. Guthix's bed can be found within the house, on which he died, and approaching it will result in a message stating that the air around it feels charged as if in remembrance of the momentous event that occurred there. 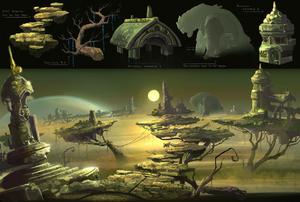