Mazcab, previously known as Chantli, is the homeworld of the goebies.[1] It is also the location of the Liberation of Mazcab raid.

There are few ways Mazcab can be reached: 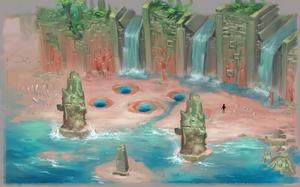 Very little is known about Mazcab. What is known, however, is that the planet was dying before Tuska had visited. The Goebies practiced Spirit Magic, a unique magic that comes from drawing on the powers of their deceased ancestors. Using this magic they were able to accomplish great feats that they normally would not be able to perform, due to the massive rocks on their backs.

One of the Goebie Spirit Magus was not happy using just Spirit Magics, and sought Elemental Magics as well, and tore them from the plane, thus damaging the planet, and creating tears in the earth through which Anima would pour out.

The remaining goebies constructed great sacred temples which trapped the world's leaking anima and utilised pipes and vents to return the anima back to its source, allowing for life to be sustained on the planet. This tradition has since been lost to the Goebie race, leading to a depletion and collapse in life on Mazcab.

According to the Ancient Statue, this led to the rise of spirit guardians who were formed from the seeping anima. Their life cycle involved wandering across Mazcab towards great temples constructed by the Goebie, where they would then return to their source. Among such guardians was Yakamaru, a water beast who glided across the rivers and seas of Mazcab until being corrupted by the Airut Shaman.

Supposedly, it was these tears in the earth which attracted Tuska to the planet, and brought about her wrath. Once Tuska devoured the majority of the Anima, she moved on leaving some of her Airut followers on her back to take over the world, with some notable Airut such as Beastmaster Durzag.

The Goebies claim they came from Chantli, meaning home, and that following its devouring by Tuska, they were on Mazcab. For a long time it was uncertain whether Chantli was another world, or just what the Goebies used to call Mazcab before Tuska came. In Call of The Ancestors, the spirit guardian Xinachto confirms that they are in fact one and the same.[2]

Prior to Tuska's arrival on Mazcab, the Goebies thrived in numerous great cities. Otot is the only known surviving great city of the Goebies according to the Acca Otot - yet this is questionable according to the Acca Kanatah, it stands as a collection of tents. There are only three known Goebie settlements on Mazcab. Kanatah was set up by survivors of the Airut: its inhabitants live a nomadic lifestyle, sinking into the surrounding environment to evade Airut capture. A third small village sits south of the old Shrine. Once a fourth village of Cotoch sat under the surveillance of the Airut, yet the village stood for just 15 days.

The Airut reside in the former Goebie temple and shrines to the east of Mazcab.

Players can gain reputation by doing activities throughout Mazcab. Handing in Goebie relics rewards the player with 5 reputation per relic. Other tasks that reward reputation include: