Leng is a frozen world with a bleak and jagged landscape of dark stone mountains. 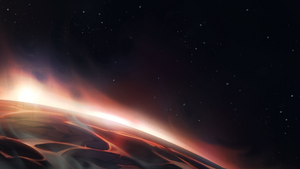 Leng was one of the first worlds to be created by the Elder Gods. It was not originally a frozen planet - it originally appeared to have a molten surface - and was home to an industrious civilisation. At an unknown point in time and for unknown reasons, the glacor race invaded the planet from space, initially appearing as icy comets that caused destruction upon landing. The glacors spread ice over the entire planet, covering its cities and inhabitants beneath a sheet of ice miles thick. The glacors remained on the planet for aeons ever since.[1][2][3]

During his trip across the universe, Zaros discovered Leng. At some point he killed an Arch-glacor and used its essence to create the ice crystal.[4] He would later use this crystal, along with three others infused with the ancient elements of smoke, shadow and blood, to create the nihil in Freneskae.

At an unspecified time, Fell Arnessen, a Fremennik man, travelled to Leng through a portal in a cave he ventured into. He became trapped after the portal closed itself and encountered the various geographical features of the planet, a hopping slug that attacked him[5], and a mysterious wanderer who ignored him.[6] Fell then encountered and attempted to defeat an Ur-Glacor and was likely killed.[7][8]

During his time as a playwright, Sliske wrote a play titled "The Whispering King" that seemed to describe aspects of Leng, which concerned "glacial planes", "secrets buried deep beneath the ice", and "wandering philosophers" who "walk the world in silence, contemplating what it means to be truly forgotten". It also made jokes about "being hollowed out and fed to ancient jaws that would grind us to dust and make us glad for it".[9] The play's title seemingly referred to Vos's whispery voice, implying a link between the being and the planet.

After the Elder God eggs were stolen by the mortal races, the elder god Wen looked to Leng and found the glacors upon its surface. For unknown reasons, shadow anima had suffused both the planet and its denizens. Seeing this, Wen conjured portals to bring the glacors onto Gielinor to help reclaim her own egg, unwilling to approach them directly.[10]

It has very strong winds and many large blizzards,[11] as described by Fell Arnessen in his journal. Leng has an eternal, frozen plain, miles deep and several large cities encased in ice.[3]

On Leng, there is a road circulating the whole planet which was created by a frozen wanderer who walks this road. This man cannot be stopped and does not respond to other stimuli.[6]

Leng is also home to two species; the Glacors, who came to Leng from afar and can be considered invasive species[2], and a race of aggressive slug-like creatures with impressive agility capable of emitting a foul ichor that prevents them from being eaten.[5]

Before it was invaded and frozen by glacors, Leng had a barren surface and what appeared to be rivers of lava.