From the RuneScape Wiki, the wiki for all things RuneScape
Jump to navigation Jump to search
The Old School RuneScape Wiki also has an article on: osrsw:Corsair Cove

Oo'glog is an Ogress city and spa that plays an important part in the As a First Resort quest. The bank and shops are not available until starting the quest, and the spas, which are the main attraction of the city, are a reward after completing the quest.

Oo'glog lies just south of the Feldip Hunter area, a popular destination for hunters and explorers alike. The most common travel hub near Oo'glog is Yanille, which lies beyond the ogre capital of Gu'Tanoth, the dangerous Feldip Hills, and the jungle itself. The sea borders the eastern edge of Oo'glog and the jungle to the west. 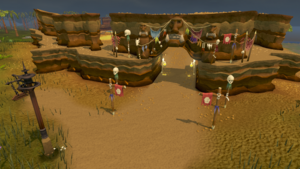 Possible options to reach Oo'glog include:

The ogresses have made their homes in southern Feldip Hills for thousands of years, having made a living for themselves by hunting the local animals with special bait and traps. The town itself is also full of special springs that the ogresses have generally used to maintain their lifestyle. Although not certain, it is assumed female ogre population scare the the male ogres, forcing them to move north. In this way, the town is left alone to the ogresses.[1]

Ogresses are known to be more powerful than the ogres themselves; coupled with the ogres' brutish strength and behaviour, this meant that very few outsiders came to Oo'glog at all, despite the ogresses' tolerance of outsiders.

The following takes place during As a First Resort.

In the year 169 of the Fifth Age, a human entrepreneur, Balnea, discovered Oo'glog and its unusual waters. Realizing the potential of a booming business in this area, she immediately spoke to the city's leader, Chief Tess, and requested she assist in the endeavor. Tess agreed, mainly for the "shinies", but also to make Balnea stop talking, as her words were confusing to the chieftain. A system was set up, but it did not meet Balnea's expectations, as the ogresses were unable to understand Balnea's words.

A human adventurer soon arrived at the strange town and met with Chief Tess, who asked them to help fulfil the bossy human's requests. The adventurer was able to set up a system satisfactory to both Balnea and Tess' expectations, and the spa soon opened for business.

The business was a success, with many paying for the spa's exclusive services, much to Balnea and Tess' delight.

There are several spas or baths in Oo'glog. From west to east, these are:

Temporary effects wear off over the course of a few minutes, but these often last long enough to give the player significant advantages for a while. Players may use the spas even if they have familiars summoned. When the player enters the spa, the familiar goes to the spiritual plane but returns immediately when the player leaves the spa. However pets are forbidden. Attempting to enter the spa with a pet summoned will result in dialogue from one the city's inhabitants telling you it isn't allowed, and a pop up message instructing you to dismiss it first.

The ogre flask allows the player to hold six doses of one of the spa's waters to be used elsewhere in a pinch.

There is a bank in the central area of the city. Many players store items gained from Hunting due to the nearby hunting grounds, therefore making it an alternative to banks at Yanille or Castle Wars. The bank is usable just after starting As a First Resort – full completion of the quest is not required.

There are three shops in Oo'glog. The shops are usable after completing the As a First Resort quest.

The owner of the shop, Chargurr sells both cooked and raw meat.

There is a salon where players may speak to Kringk for an ogre wig which costs 50 coins, or get a "facial" from Muggh (actually a lump of mud applied to your face that occupies the helmet slot).

The facial looks like a large hand print over your face, and crumbles away when removed. 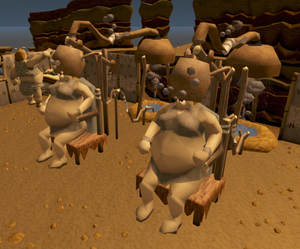 There are eucalyptus and achey trees to the west of the city. Travel north of the west entrance of the city to reach the area. This area is the only area so far in RuneScape to have eucalyptus trees.

Though not within Oo'glog, a red sandstone rock is just north of Oo'glog. This is located northeast of the thermal spa and northwest of both the mud bath and the level 29 agility shortcut (rock passage). To mine it, you need level 81 Mining (you do not need to do the As a First Resort quest in order to mine red sandstone). Mining red sandstone yields 70 mining experience per rock. Only 50 red sandstone can be mined per day at this location.

A potion flask is a container that can hold 6 doses of a potion, two more than a vial.

A Robust glass machine can be found in the city after completion of As a First Resort, with the dwarf Rutmir Arnhold next to the machine. Players must first ask for permission in order to use the machine. While a second machine can be found in the Ithell district of Prifddinas, it also requires the completion of Plague's End (along with As a First Resort) in order to use.

With completion of As a First Resort, the dwarf Teplin Macagan can be found outside the bank, offering flask decanting services. He does not charge for his services; players just need to have flasks ready if they wish to decant from flask to flask or potion to flask.

Near the southern wall of the city several animals can be hunted for:

Chief Tess states that as they have been living in the area for ages, the animals are wary of any traps that are placed, and that in order to hunt them, they must be lured to them with their favourite smell from a specific flower. Each animal is attracted to a specific smell, and will turn "aggressive" if the wrong smell is used, at which they damage the player for small damage instead. There are various flowers unique to the area which can be picked around the city.