Mikasi was one of the Combat instructors. She was located in the building north of the Lumbridge general store. While she was most likely intended to help new players, she gave information to all players about Magic in combat.

She gave out 30 mind runes and 30 air runes to any player every half an hour, unless they had the runes in their inventory, bank, or if there were runes close to them. Some people used to cheat her out of 30 air and mind runes using the drop trick. An update changed the instructor to direct the player to pick the runes on the ground (although only if the player was standing close, to or directly on top of them). However, now it is Aubury in Varrock who gives out the runes for free, from his shop.

Mikasi claims that she was a friend of Aubury of Varrock, having apparently learned of your knowledge of the Rune Essence mine, a secret she, too, shared, and she had some degree of knowledge in Runecrafting as well as Magic, giving her dual status as instructor of both. Despite her friendship with Aubury and high skill in magic, she was apparently not counted among the few trusted Magic users scattered across Gielinor Wizard Sedridor had told the Rune Essence Mine teleportation spell to, or at least she did not offer to teleport the player there herself, though Mikasi did possess knowledge of the mine itself.

Mikasi also possessed knowledge of the Grand Exchange, its location and functions, and of Brugsen Bursen, saying that if there was one person who knew how to make a fortune, it would be him, suggesting the player sell their wares there.

According to Saradomin in his last God Letter, in response to who of RuneScape's denizens possess knowledge of the rune essence, "There are others too, of course, but I may not reveal their names, for some wish to keep their ties to the wizards tower secret for their own reasons, and some I will not name, for the evil purpose which they have chosen to put their knowledge to." Mikasi may have been one of those who prefer to keep their ties with the Tower secret.

In the former tutorial, Learning the Ropes, Mikasi and Sir Vant both possessed knowledge of each other, and she aided him in fighting the dragon underneath Lumbridge by giving him a bag of runes to weaken the dragon, though only after you have "mastered" Magic and prove your own worth by using the mind runes and air runes she provided to cast Wind Strike on the magic dummies.

A recent update had removed the "Claim" and "Work for" options with Mikasi, though she had heard of Aubury's free rune samples and suggests the player could go there to seek runestones for Magic training. However, if the player had not yet completed her job, you could still use the requested items on her to claim your reward, even after the update. Mikasi told the player that she had "travelled the world for many years, training...magic", but, deciding to settle down, founded the training arena with the other two instructors to help new adventurers on their quest to mastery. 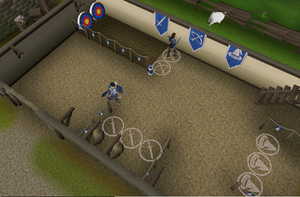 Certain jobs she handed out to players are for her personal use, such as giving her cow hides, for she intended to transform the cow hides into leather and then see if she could come up with a spell to destroy them, or giving her balls of wool, for she had "so many amulets that require stringing" and thus always needed it; Mikasi also desired logs, for, apparently, "Last Wintumber was cold enough! I'm looking to stockpile this in case of another cold season." Mikasi also sometimes desired runes herself, and due to her busy position as Magic and Runecrafting Tutor, she at times sent players to find runestones for her, such as all four elemental runes, for she claimed she is always handing runes out for training.

Before an update that removed jobs, these were items that she might want you to bring to her: