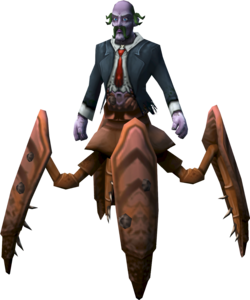 The Financial advisor is a businessman found in the Tutorial Island bank. He tells players about how to make money and use the bank. He also features in the quest Beneath Cursed Tides.

This information has been compiled as part of the update history project. Some updates may not be included - see here for how to help out!
Retrieved from ‘https://runescape.wiki/w/Financial_advisor?oldid=35592932’
Categories:
Hidden categories: