From the RuneScape Wiki, the wiki for all things RuneScape
Jump to navigation Jump to search
Acting Guildmaster ReinigerAssociate ReinigerLottie Reiniger? (edit)? (edit)

Acting Guildmaster Lottie Reiniger is the acting guildmaster of the Archaeology Guild and an expert on the Third Age. She is located at the Archaeology Campus where players can start the tutorial for the Archaeology skill. Following Guildmaster Tony's disappearance to the mysterious monolith, she has temporarily taken over of his duties until he returns. Like most of her fellow guild members, she is optimistic he will return to them. Reiniger is a member of Silhouette, a secret Zarosian organisation.

Players can start the graduation ceremony to the next rank when they have obtained all the requirements necessary for it. After each rank up ceremony, players may speak to Reiniger to obtain some material manuals, hi-spec monocles, tarpaulin sheets and archaeologist's tea. 1 of each boost is given free for Intern, 2 each free for Assistant, 3 Associate, 4 Professor, and 5 of each boost for free with Guildmaster rank. If players do not claim anything until Guildmaster rank, they will get 15 material manuals, 15 monocles, 15 sheets, and 15 archaeologist's tea all at once in noted form.

Lottie Reiniger was a failing student who was recruited by Xephos, a member of a shadowy Zarosian organisation named Silhouette, to help Dr Nabanik in restoration of the Senntisten Temple. While he valued her resourcefulness, he never fully trusted her and kept a close eye on her. Knowing the organisation kept track of their members and monitored potential dissent, she kept a pretense of being happy to cooperate while infiltrating the Archaeology Guild, where she reached the rank of associate. During her task she befriended a fellow archaeologist, professor Tony Robinson, whose optimistic outlook and enthusiasm for discovery made her love archaeology again and care about their work.

The rise of the Guild[edit | edit source]

Some time after dragonkin Kerapac stole the Needle and took it to an island that the Varrock Museum has been interested in for a long time, she was arguing with Tony and Seth Minas over the best method of transport for getting to Fossil Island as well as how the place should be properly named.

The following takes place during Archaeology/Pre-release. 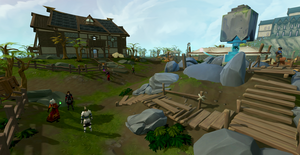 A while later Tony noted that they should clean up the Guild building. When surprised Lottie pointed out it looked like that for ages, he explained there have been developments at the Museum which should soon result in additional funding, which would lead to establishing a proper Guild. She suggested using some of the money to pay someone for renovations and implied that interns might be used for the job as well. However, despite Tony's hopes, the Museum was unable to provide sufficient funding to the Guild, making the archaeologist desperate and susceptible to a proposition made to him by Xephos who appeared at the Guild and offered him funding from his organisation in exchange for some of the finds and artefacts, to which Tony agreed. Following the increase in the Guild's budget, Reiniger noted they are getting more popular, attributing it to the lure of history. Robinson noted the money also played their part, to which she agreed, but wondered whether they needed so many people for just one dig site. Tony admitted he was aware of the issue and mentioned other possible sites, like one in Morytania.

At some point Zaros appeared near the mysterious monolith, in reality an Elder artefact known as the Codex, located in the campus that has been puzzling the archaeologists for some time. As Nabanik and Tony watched in shock, Zaros has activated and raised the monolith and teleported away. Following that, Reiniger and her colleague examined the monolith, talking about what happened and what the mysterious object could be. Tony had been trying out numerous artefacts to interact with the monolith, to no avail, until Xephos appeared at the Guild again. Reiniger stood by and watched silently as Xephos handed Tony a broken black stone that used to belong to mahjarrat Zemouregal and suggested using it on the monolith.[1][2] Tony did so the next day and has been sucked into the Elder artefact.

Following Tony's disappearance, Reiniger took the position of Acting Guildmaster, as she believed Tony would be able to return one day, and started feeling remorse that she let her friend take the stone. Realising she might eventually slip up and have to deal with the inquisitors, she started to write down research notes addressed to Tony, but meant to warn those who might find them of the secret organisation. She expressed frustration that she cannot leave Silhouette and promised to find a way to rescue Tony. She has also been studying the monolith, noticing extremely old glyphs she had never seen anywhere else before that she has been unable to decipher.

The following takes place during Archaeology.

As an Acting Guildmaster she trained new recruits of the Guild in the basics of archaeology. One of them was the World Guardian, who, to Reiniger's surprise, was able to sacrifice a relic to the monolith without being consumed themselves. When asked whether that was a possibility, Lottie admitted she should have mentioned it earlier but noted that the monolith has been off limits since Tony's disappearance and that there have been no other accidents since. As the new member of the Guild advanced in ranks and gained new qualifications, the monolith seemed to have been responding to them in unexpected ways, leading them to research it. Reiniger was increasingly certain that it must have been Tony trying to communicate with them. However when the World Guardian ultimately took the position of Guildmaster, the monolith did not react, to Lottie's surprise.

Xephos tasked Lottie with organising an expedition to Orthen in order to uncover an artefact coveted by Zaros. She believed it a futile endeavor as none of those sent for the object had returned, but decided it may be worth for the other linguistic discoveries uncovered in the area. She decided to send some of the more ruthless recruits in order to keep appearances of trying to complete the objective without feeling guilt following their inevitable deaths. She also sent one more competent female agent meant to quietly retrieve what Lottie herself has been looking for. As she expected, the recruits died in the Orthen Oubliette due to deadly amounts of shadow anima surrounding Raksha.[3][4] [5] However her trusted agent returned after a month, during which Reiniger was fruitlessly studying the monolith. She provided the Acting Guildmaster with dragonkin tablets featuring more similar glyphs next to dragonkin script that she was hopeful to translate. She noted in her research that Zaros himself had to step in to retrieve the artefact, which worried her. She decided she needed to keep a low profile and study the new finds, which was possible thanks to the World Guardian who rose to the position of a new Guildmaster.

The following takes place during Heartstealer. 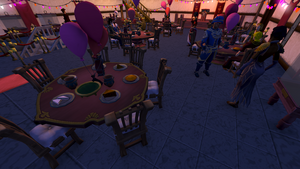 Lottie Reiniger at the Museum gala.

At some point after the start of Orthen excavations, the Varrock Museum organised a gala due to a donation of an expensive, heart-shaped ruby, which Reiniger has attended. She enjoyed the evening, happy she could be herself rather than the Acting Guildmaster. Depending on whether the player has already achieved the rank of Guildmaster, she expressed things have been or would have been easier for her due to someone else taking over the responsibilities. Later, the player requested a distraction from the Drunken Dwarf, who starts it by breaking a glass that ruined the dress she wore to the occasion.

Ultimately, with the help of Orthen tablets, Reiniger was able to translate the glyphs. After some musing on the exact translation, she discovered they refer to shadow anima under the name of Anathema. When she spelled the word outloud over the scripts, the glyphs glowed and light filled her vision until she suddenly felt darkness and nothingness. When she regained her senses in a cold sweat, she immediately proceeded to write down her fleeting vision in her notes. She couldn't explain it but knew it was what Tony must have felt too when he was consumed by the monolith. She understood Zaros was on his way and that he could complete what she started when she said the word with the right reagent. Knowing his plans needed to be stopped as they could mean the end of everything, she decided to use her contacts to get the word out to anyone willing to listen. She decided there is no point in running and decided to face her fate head on.