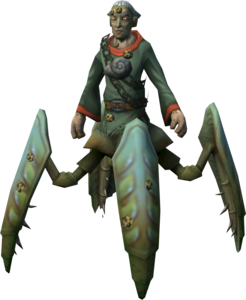 Brother Brace, also Prayer instructor, is a Saradominist monk who teaches religion and morals to young newcomers at Tutorial Island's prayer school. He disappeared when Tutorial Island sank and returned during Beneath Cursed Tides.

During Beneath Cursed Tides it was revealed that all inhabitants of the island were cursed and morphed into sea creatures. During the quest the player has to do his task and the tasks of other instructors to break their curse. At the end of the quest, he and the other tutors come to Mudskipper Point and thank the player for their help after which they all leave to set up a new life.